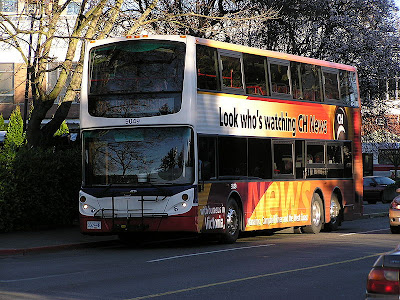 BC Transit in Victora operates double deckers on some routes
in  this Wikimedia Commons photo is an Alexander Dennis Enviro-500
CLICK ON photos for full screen image.
In terms of passengers carried per year, Victoria, in British Columbia, west coast Canada is the most successful "stand alone" (not contingent to a larger city) city of twenty five CANZ cities 200,000-800,000 tracked for some years by this blogster. A city of very similar population size to Christchurch, and with tourism a big but not overwhelming factor, Victoria's public transport system continues to steadily grow new ridership. and has now topped 25 million passengers in the last year. An interesting aspect of the linked news report; a precise breakdown of funding sources.

In contrast - a little less transparent - the Mayor of Saanich, on the northern edge of the greater Victoria area, claims in this You Tube BC Transit is buying land needed to build a light rail corridor before any official commitment to build has been made, by city, region and Province.
Posted by David Welch at Wednesday, June 01, 2011