What is perhaps so curious is that Christchurch was always the most staid and respectable of cities, with everything laid out so neat and orderly, and now swarms of earthquakes staggering and roaring and belching like drunken brigands shake and shudder, rupture and tear away at the structure of the city and our nerves.

Todays biggest quake on the Mercalli scale [which measures intensity rather than size and spread] was 8 out of 12, only one point behind the 9 out of 12 rating of the very shallow, very fast 6.3 richter scale quake that killed 181 people on February 22nd. That particular quake left the central city munted and so very dark and ominous at night, guarded by soldiers at breaks in the cordon of temporary fences. Over 900 buildings including most of the older heritage buildings and several modern high rises, up to 26 stories high,  will be demolished.

Today about another 50 buildings apparently joined the queue for extinction, while many other already damaged buildings got a faster than expected start to the demolition process. In the eastern suburbs liquifaction is back in fashion (or NOT) for the umpteenth time, with pipes ruptured and water gushing everywhere and great swards of grey silt forced to the surface on roads, footpaths, parks and private properties.

The experts say that this is very rare, that the epicentres and faultlines in an earthquake are directly below a significantly large urban area, greatly intensifying the effect. These faults were long hidden and have been discovered, the hard way.

Seeing as this is mainly a public transport blog I add a photo of the heritage tram tracks sheered clean in half, taken after the February 22nd earthquake, in Armargh Street. I don't know what sort of tensile strength tram tracks have but if steel and reinforced concrete bedding this thick can be pulled apart, you can see what we are up against! 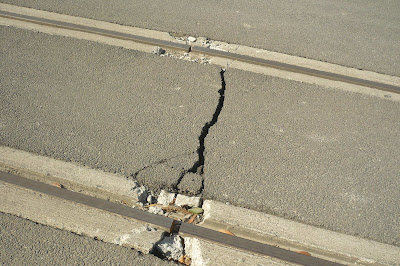 Click on photo to enlarge
Posted by David Welch at Monday, June 13, 2011