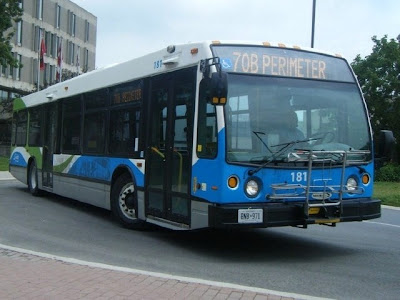 Guelph Transit Nova Low Floor bus pulling away from the University of Guelph
Source; Wikimedia Commons
Guelph is a modest sized city 28km east of Kitchener-Waterloo, 100 km west of Toronto, in the Province of Ontario. The name Guelph itself, according to Wikipedia, is derived from references to the German royal family of the 19th century, a reflection of the high proportion of people from Germanic states, including relgious sects escaping persecution, that originally settled this part of Canada. The City of Kitchener itself was called Berlin until the First World War made it ..well, uncomfortable. Renaming the city after WWI British Army Commander Field Marshall Lord Kitchener who died in a naval battle that year was, by contrast, an astute move to express loyalty.

With a population of 114,000 Guelph, also a university town, is not much bigger than Dunedin here in NZ.  Yet its public tranport system carries over four times more passengers. (6.3 million passengers per year versus 1.5  million passengers per year). Universities are always big ridership sources, and in Guelph the university has been described as contributing half the bus ridership but only 15% of the transit system's income.

In contrast I see value in comparing similar systems in countries and cultures that match NZ, as far as possible in demographics, which smaller cities in elsewhere in NZ and in Australia and Canada come closer to doing than most. This said, it should also be remembered that, although Canada the world's second biggest country by land area is vast, almost the entire population lives in the warmer, more arable lands with a few hundred kilometres of the border with USA. Guelph lies in the area defined as Southern Ontario - home to 95% of  Ontario residents, not least Toronto and many contingent cities in a horseshoe pattern around the base of Lake Ontario. It is an area slightly larger than Te Wai Pounamu, New Zealand's southern larger island, but has 11 times greater population. With transport and roading transport receiving both Federal and Provincial Funding, as well as local imput and fares, small city public transport is probably better funded or can access better resources more cheaply than a city in an isolated country like NZ, where the whole country has less than one eighth the population of Canada. Guelph is also the same size as Dunedin but is as close to Kitchener-Waterloo (c450,000) as Rangiora is to Christchurch, all factors generating potentially greater patronage. As usual there is a lot we can learn from overseas systems, though sadly governance of public transport often falls upon politicians who speak off the top of their head, seeing multi-million dollar business of public transport with its multiple complexities and pitfalls as if it was some sort simple pin in the map exercise.

The local newspaper in Guelph, The Guelph Mercury is running an interesting, informative, human and very readable seven-part series of articles about public transport in Guelph, focussing on a different aspect in each edition. Judging by the reports linked below Guelph has built an impressive level of service technology for a relatively small city, acknowledging that there are some aspects, such as smart cards outside their budget.


Topics each day are (my description) as follows;


memories spanning the last 30 years of a long serving operator


how the city budgets its transit dollar


examines the "sometimes acriminious" relationship between university and transit authorities


looks at the future of Guelph transport
Posted by David Welch at Wednesday, June 08, 2011