Christchurch International Airport to the rescue! 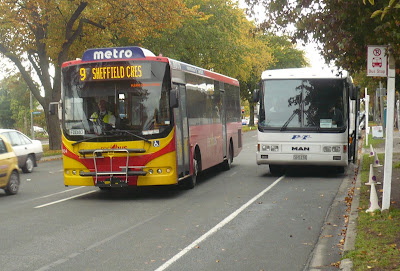 With the CBD of Christchurch closed, cordoned off for safety, long distance coach provider Naked Bus leaves from a rather primitive roadside "Bus Exchange"created by Metro/Environment Canterbury in April. Now Four months after the February earthquake Christchurch International Airport Ltd has stepped in to create a regional and Te Wai Pounamu wide linked transport hub - ironically it is something the city has long lacked.
Tranzwatching, NZ in Tranzit advocacy, in Christchurch. New Zealand

At last Christchurch gets a long distance and regional coachline hub, with top class traveler's facilities. It didn't take moving mountains to get this, but something not too far removed - one of the most violent earthquakes ever recorded directly below a sizeable urban area!

However unlike other provincial areas of New Zealand, such as the Bay of Plenty, Otago or the Waikato, it is not the local regional council (Environment Canterbury) organising this facility to create this long overdue facility. Rather it is Christchurch International Airport Ltd (CIAL) , a Christchurch City Council local authority trading enterprise (LATE) that has created the long distance travel hub. It has been created following the devastating high velocity earthquake that has devastated and closed most the central business area of Christchurch to allow 900 damaged buildings to be demolished, possibly taking a year or more.

“We wanted to simplify the travel process for people coming in and out of Christchurch following the disruption of the earthquakes,” said Christchurch Airport Manager Commercial Development Matthew Day.  Day points out that the new airport terminal has fantastic passenger facilities for use by all travellers, not just people booked on flights. “It’s warm and comfortable, it has lots of seating" [and a post earthquake necessity in Christchurch ]"pure artesian water and free showers", also "a fabulous food court and retail shops, as well as travel booking services”.

Amongst the bus and coach services using the hub will be Great Sights (touring rather than timetable), Intercity Coachlines, and Newmans - see Intercity (all linked to Ritchies and Snelgrove family ownership) and Knight Rider (evening service to Dunedin) the West Coast shuttle, and Budget Shuttles (tofro Timaru).

Not mentioned or included as running from the airport are three other significant operators Southern Link, Atomic Shuttles, and Naked Bus,  though whether they have been offered the opportunity to depart from the new hub, or fenced out by competitors is unclear.

According to a report in SCOOP The airport company began discussions with other transport providers following the earthquakes, when it became clear that there was no longer a central point in the city where travellers could be collected and dropped off. Coupled with traffic problems due to the closure of the CBD, it became clear that the airport could offer a solution.

NOTE; NZ in Tranzit has campaigned in blog format, and in previous years the blogster himself without success in submissions to the Canterbury land transport strategy reviews, for a co-ordinated approach, led by the regional council, to user friendly long distance traveler systems (commuter, casual traveler and tourist). This includes recognition of the airport as a key en route stopping point.