Riding the Tide - new light rail opens in the USA 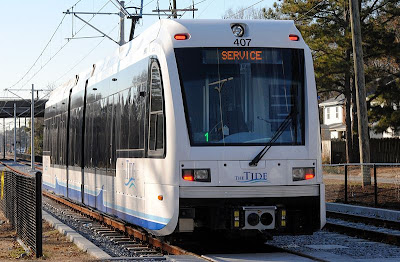 America's latest new light rail system, a single line corridor in Norfolk, Virgnia, USA opened this weekend with over 30,000 people taking advantage of a chance to have a free ride. **

The light rail system "The Tide", will be the first light rail system in the State of Virginia. The initial line is slightly under 12 km in length, is ultimately expected to carry 7,000 -11,000 passengers per day (opening year bemnchmark is a more modest 2,900)  at an operating cost of only $6.2 million.

There has been a lot of local consternation at costs over-runs, the project ran $86 million over estimates and saw the replacement of project head part way through. Despite this - at $27 million per kilometre this appears to be a very modest set up cost - significantly below costs per kilometre for most other new light rail systems recently constructed or planned in North America or Australasia or the $85-90 million per kilometre expected in Christchurch's proposal. In any event only $50 million is paid by residents of Norfolk city itself , the balance coming from State and Federal grants.

Norfolk city has 243,000 residents, but as usual in the USA this figure is misleading - it is actually the core of the Hampton Roads metropolitan urban area which has about 1.7 million residents. The Norfolk area is home to the world's largest naval base (the expression "Roads" is related to the old naval term "roadstead" for safe shipping anchorage close to land) near the entrance to the largest inlet on the US Atlantic coastline, Chesapeake Bay. The naval and associated military bases bases are served by express buses on HOV lanes - the light rail running between the University and downtown Norfolk to terminate at a major hospital.

Only a few weeks before the opening officials of the transit authority - Hampton Roads Transit - announced they are removing two free shuttle services previously operating in areas over-lapped by the light rail system.(Editor Note; This seems to be a common pattern with light rail projects, authorities removing any bus services that might compete in any way. To what extent it is legitimate and to what extent it is a bit of gerrymandering to prop up rail usage, is impossible to tell in most situations (at least from this distance).  What buses could afford to do for free light rail can not, and passengers will now be charged $1.50 per trip

A spokesman for Hampton Roads Transit told news media "HRT and the city agreed that the NET could no longer be free because it would compete with the $338 million rail line that leaders worked for more than a decade to bring to Norfolk. So government officials worked to expand the reach of the NET as a paid service."

Excluding the odd hertage/tourist tram there is no  American city with a metropop (and tax funding) base as small as Christchurch (400,000; national pop.4.3 million) that operates light rail. The nearest in comparable size is Tacoma, State of Washington, which has a short line in the CBD of a transit system serving an urban sprawl of over 600,000 residents (Pierce County). This 3.6 km light rail carries about the same amount of passengers as the iconic yellow hybrid shuttle buses did in Christchurch (circa 1 million per year) but, at $80 million set-up, with three cars, costing 40 times the capital cost to implement.

**( link includes You Tubes, including a very interesting one, mixed in with other local news, that matches a 1996 newsreel against current situation.)