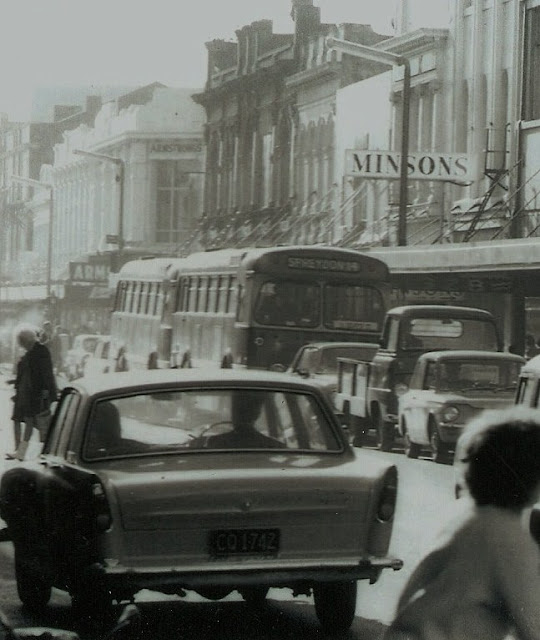 All gone - Colombo Street north of The Square, Christchurch in 1960s
NZ in Tranzit believes the time when it was possible to run effective bus services without
buses having a segregated lane structure in congested areas is also gone.
Tranzwatching in Wellington, Te Ika a Maui [Despite the above photo]
Wellington City Council will vote this week on whether to create 24-hour bus lanes down the full length of Courtenay Place.  The council's strategy and policy committee will also decide whether to create peak hour bus lanes along Kent and Cambridge terraces and Adelaide Rd. The decision will be open to publ;ic consultation
Comment
Courtenay Place is a virtual bus exchange anyway - isn't it bizarre that transit systems carrying tens of thousands of passengers a week should only now be debating whether to beg a teeny-weeny percentile of total roading surface specifically for buses at all times, or even in peak hours.
One day City Councils and ilk are going to wake up that pouring tens of millions into bus systems that have to fight other traffic, queue with lines of cars, have no priority at traffic signals, etc is an absolute waste of money. If you want to cut congestion, green house gases, roading costs, vulnerability of citizens to oil prices, and get people out of cars, buses must be given primary status and what probably amounts to 10% of all road surface in CBD and key congested areas specifically for their own uncontested use- most of it full-time (locked off at night).
When buses have priority or are routed away from congestion queues (around a nearby bus only access  back street, or via bus only free turns into segregated  bus lanes or underpasses under busy roads etc) and when buses are very fast and smooth and rarely stop except to load or drop off passages (many anyway pre-paid at busy station points) only then buses will begin to attract the great patronage and develop the frequency and reliability that lifts them into a completely different dimension of public transport.
If a bus can run same time every time (within 5 minutes of shown departure time) it also means routes running at 15 minute frequency can be woven into core patterns passing through key transfer points at 7.5 minutes of each other - a system that per se runs in every direction. If each bus route is thought of as a "de facto railway line" and separation of running area is maximised at every point possible location, and greater centralised monitoring and control allows constant fine tuning, the whole status and power and effectiveness of buses will alter. The technology is already there....the political will is not.
See also; http://buswatchnz.blogspot.com/2011/07/light-bus-network-essential-elements.html
Postscript The bus lane proposals above were subsequently adopted by Wellington City Council
Posted by David Welch at Monday, August 15, 2011