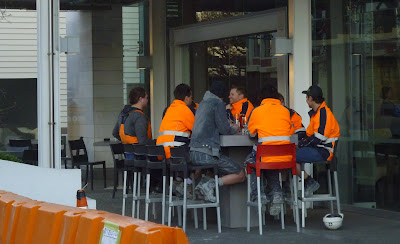 After work drinks - not the usual executive crowd in this red-sticker zone edge, up-market bar (though high viz orange is extremely fashionable in quake city). As the city begins to get back on its feet bus services remained stuck more or less at the same crude substandard level of months ago. There is no obvious systematic or committed attempt to support the needs of different resident and worker groups, or indeed bar staff and customers at businesses like this.
Photo NZ in Tranzit

It has long been a policy of the city authorities in Christchurch to try to attract inner city residents and a major reason is to reduce usage of private cars, either because some of those residents chose not to own cars, or not to use them to get around the inner city, relying on the greater concentration of public transport in their areas.

Two big factors supported this policy - unlimited travel (multiple bus trips and transfers) on Metrocards for the two hours following first use (and then unlimited travel for the rest of the day on any use after the first period expires); and the inner city Free shuttle which links the main areas of the city north-south (but not so useful east or west in the CBD)

An article in The Star yesterday about Ballantyne's Department store revealed that before the earthquakes an estimated 52,000 people were living between the four avenues but a significant portion have relocated or had to move because of damage to their house or apartment. There are a few high rise residential towers in the central cordoned off areas, the "red sticker" zone, but to my observation I would say the great bulk of inner city residential areas are north of Kilmore Street and east of Madras Street. The amount of damage in these areas is spasmodic and would suggest most locals remain in residence. So while nobody knows what significant relocation amounts to, I would be very surprised if 50% of residents between the four avenues are gone.***

Even on a very conservative estimate this means the city and Ecan have left about 20-25,000 residents and probably as many workers in restarted businesses with virtually no bus service whatsoever!

A population almost as big as Timaru not even offered a single convenient bus.

The opportunity to restate The Shuttle route, to link these areas to food stores and supermarkets, to link the many businesses",  and all areas to the new entertainment zone and recreational areas in Hagley Park even with a nominal $1 dollar fare or even a conventional bus fare charged, has not been taken up by the city council.

Opportunity now clearly seems to exist to operate a circulating bus around the periphery of the city central, even if only in one direction, that does not involve cordoned off areas, or buildings to be demolished. and not least, would link inner city residents and workers to other bus services at the temporary (yeah right - for month and months) bus exchanges, and vice versa. 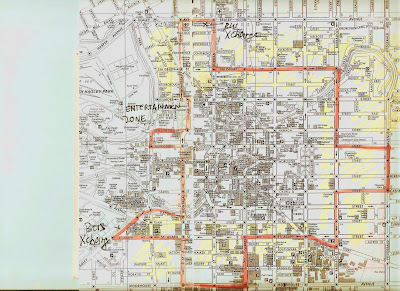 Possible scenario for a recovery level Shuttle service; Linking up the functioning dots via the functional and non compromised roads - a one direction only circuit but less than 30 minutes to complete (most journeys logically only 5-15 minutes). This pattern includes  both bus exchanges, Hagley Park entertainment zone, the hospital, CPIT and many operating city south area businesses, including supermarkets.  It is aimed to serve all visitors, workers and residences particularly the large residental corner between Bealey and around Fitzgerald Avenue north of Gloucester, Kilmore Street and Avonside Drive area - currently a long way from any bus service at all!
Orange suggested route; yellow active residental and workplace areas.
Click on image to enlarge
The Government has given $400 million specifically for the recovery of transport - most of this will go for roads but is it too much to respect the 24,000**  people a day (averaged across seven days) who catch city buses and try to support them as well?
Judging by the shameful efforts of Ecan and city to date - it seems, yes, it is too much effort!
*** Today's Press by chance, actually has the shift in electorate figures - a net loss of 2145 for Christchurch Central....it also makes me realise that the rather large figure in The Star maybe for the electorate rather than as quoted, between the four Avenues. In this case the loss is insignificant but the real inner city population will be closer to 25,000... same difference in the end!
**An approximate guess based on average daily patronage of 46,000 trips per day (17 million per annum) pre earthquakes, though of course this is concentrated mostly on working days of up to 60,000 unlinked trips.  Actual number of bus riders is based on assuming about 10% are one one way (tourists leaving town/people who get a ride home etc) = 4,500; and 10% transfer multiple times during the day (average 4 transfers) =1100 (subtotal 5600 individuals making 9000 trips). And assuming the remainder,  80% of patrons only make one trip and one return trip = 18,500 people making 37,000 trips. This gives 24,100 separate people riding each buses each day at least once. Presumably Metro will have the actual figures but I'd say they will be somewhere  in the same ballpark.
Posted by David Welch at Wednesday, August 03, 2011