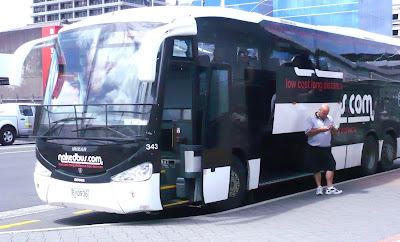 Naked Bus driver phones the missus (we hope)- (just kiddin') - while long distance traveling passengers take a refreshment break inside at the Transport Centre in Hamilton - another city that has made an effort to integrate local, regional,  inter-city services and taxi services through the same quality hub point.  Click on photo to enlarge (shoddy quality photo by NZ in Tranzit. 2010)
Tranzwatching in Northland, Te Ika a Maui, New Zealand

Whangarei, New Zealand's northern most city, has built an attractive bus depot/information centre/art museum project, called "Te Manawa - The Hub". However Naked Bus and InterCity Coachlines subsidiary SKD (which runs the Northliner)  - the two largest regional and inter-city operators - may not even use the $1.4 million bus station according to this story in The Northern Advocate.

The Hub is intended to be the drop-off and pick-up point for tourists passing through Whangarei, three weeks out from opening date the companies are uncertain and unhappy about conditons imposed with using Te Manawa facility.

Whangarei, a city of 52,000, is also served by a modest local bus system operated under contract by NZ Bus, the country's biggest bus company responsible for operating a high portion of Wellington and Auckland bus services
Posted by David Welch at Monday, August 22, 2011