The decision to use portacoms for waiting rooms in the temporary bus exchange appears to be another step in the degradation of Christchurch's bus service by those elected (or appointed) or hired to maintain it.

According to a report in Voxy the "temporary exchange" is expected to be in use for up to two years.

This dateline should be viewed with appropriate cynicism - the councils that have been elected over the last decade and a half have failed to complete many public transport project within the originally prescribed time frames, some never completed.

If the council can't raise the Government funding, the moral energy, the required skill base or funding required to create a more adequate response now, with $400 million emergency funding for restoring transport in Canterbury made available for Christchurch recovery, the likelihood of achieving larger goals in this future time frame seems marginal.

In what can only be described as a statement bordering on farce, Chair of the Transport Committee Councillor Chrissie Williams says “It is important to attract people back onto the buses and the re-establishment of a Central City bus exchange is a big step in that direction.”

Williams acknowledges "Council’s ability to act now in establishing a temporary Central City bus exchange is important to improve the level of certainty, reliability, safety and comfort it will bring to passengers.

Underlying this is the failure to acknowledge that the reduced status and image implicit in such "budget responses" does huge damage to public transport, adding to the failure to create an effective post quake bus service for many months (services still grossly inadequate for eastern suburbs, cross town users, evening travellers and planning any trip that relies on transfers).  Nor does the statement acknowledge that the inevitable wear and tear on buildings never designed for use by thousands of people each day have great potential to create a shabby refugee camp status and unpleasant windswept platforms.

Bob Parker has said that portacoms will be used as waiting lounges at Christchurch airport. Yeah right. The status of surface level public transport in Christchurch, beneath all the sustainability spin speaks for itself.
It is perhaps also significant that very few council departments expect to work from portacoms for the next two years!

Christchurch ratepayers pay millions towards buses, as do taxpayers, and bus users pay fares to support adequate public transport.  Over a quarter of the population fall in the higher mobility full or part dependency groups, retired persons, independent children 10-16, tertiary students on limited income, ESOL students and tourists without transport, and those with a range of disabilities from foreign language limitations to heart disease and birth conditions effecting mobility or mental capacity.  This is quite apart from peak commuters, the majority women in white collar industries, often where husbands need the car for work, or all day city parking charges would be too burdensome relative to wages.

Among the many public transport projects council has not completed (does not even appeared to have started, except perhaps at Hornby) is the building of nine suburban transfer stations budgeted for and promised in March 2007, though first tentatively suggested back in 1962.

For suburban exchanges, it seems to me these will need to have loading platforms that include closed spaces, and over footpath verandha spaces etc - what a chance for an architetcture or design student contest to design a once piece waiting area. loading area, concourse, in steel and in glass, possibly some external non-structural stone-work. A primary criteria would be size factors and that this can assembled in kitset (created in any part of New Zealand)  and then broken down for relocation as (a) part of the new temporary bus exchange from autumn next year (b) subsequently broken down and reassembled at one of the key transfer suburban points in the future, bolted onto a new concrete foundation. Disaster turned to advantage. (I like concourses that have something of the character of those in China (see below) albeit in a climate cooler and with cold winds greater areas of wind shelter maybe needed, as well courtyard areas and a lounge that can be warmed (to 8pm) - opportunity for traditional or abstracted Maori or ethnic patterns to be built into the posts or steel ceiling beams would give these transfer stations an unique flavour). If that is not possible the council could co-opt the award winning design of the bus shelter at Frankton Queenstown. building it out removable materials. Add the morale boost of style.  But portacoms...? 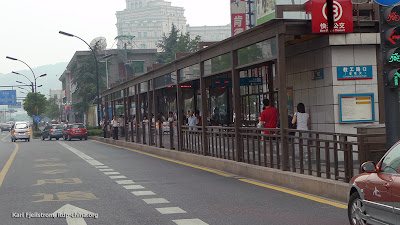 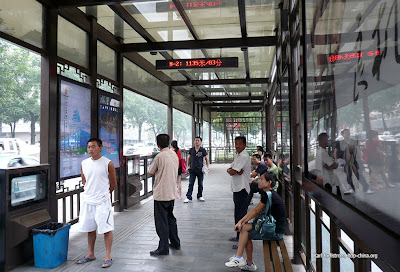 Portacoms for two years (and counting) in something similar to this (with additional glass and automated doors ) in six months? NZ in Tranzit advocates a Design contest,  bolt together relocatable, steel and glass based design with NZ or Christchurch specific flavour that can subsequently be re-sited as the basis for a future permanent suburban trasnfer station. Photo BRT station in Hangzhou, China. Photo thanks to Carl Fjellstrom IDTP. Click on image to enlarge

Approximately 32,000 separate individuals use buses in Christchurch on the average working day
- a portacom policy for two years for Christchurch people when the Government is currently funding an extra $140 million into Wellington and Auckland commuter rail is a gross insult!!