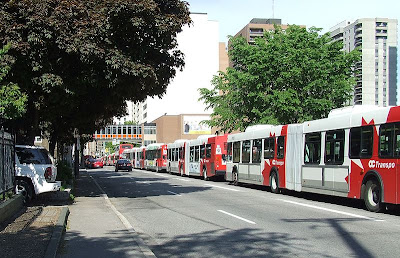 On patronage per capita Ottawa- Gatineau (1.4 million metropop)  is the most successful public transport system in any city under 2 million metropop in North America or Australasia. This is achieved almost entirely using buses and segregated busways;  a downside of  the success -  too many buses in central city streets, here on Slater Street

From my reading one of the big problems for all public transport systems is the tendency to end up with too many vehicles - buses, trams, light rail vehicles - crowding in the centre of cities, particularly at peak hours, in effect creating almost walls of vehicles which pedestrians then have walk around or risk negotiating a passage between them.

Another problem is that there is little point designing flash segregated busways that dramatically cut travelling time from the outer suburbs but then come off a segregated busway straight into several blocks of inner city congestion. This was a problem (I don't know if it still is) with a T-Way bus rapid transit corridor in Sydney a few years back.

It is a matter I have given some thought to and I suggest the following solution, based on the removal of the existing one way system around central Christchurch - rather only the outer clockwise circuit is retained - not so much as a way of cutting through the city but as (despite being a square pattern) a short hop way of cutting "diagonally across the central city" (eg Victoria Street to CPIT), or "corner to corner".

Although a range of other transit services (including an inner city shuttle and the heritage tram) would travel through other streets, the bulk of those travelling into the inner city from outer areas would travel on very fast and direct the bus rapid transit system utilising segregated busway and traffic light priority strategies.

In the map below this retained "outer" one way system is blue.

the pink line continues westwards after the Bus Exchange, the BRT lanes would exit via Tuam (and Hagley Avenue - not shown) before moving westwards more or less parallel to the rail corridor

Circles - bus stops - the larger two (behind the Casino, near Madras and Tuam streets ) being also points where other routes pass through and offer additional transfer nodes 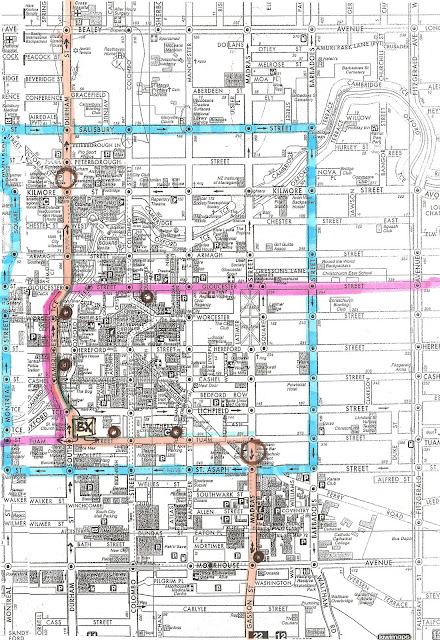 With bus rapid transit likely to employ articulated buses and be controlled by a central control room and a speed indicator system as they enter the area between the four avenues, it is important the systems has extended length stops [notably drop off zones] and "banking areas" where multiple buses nose to tail do not cause either practical hindrance or visual pollution in a central retail area.

Anyone who knows Christchurch well will recognise here that Gloucester beside the (present) Coachman Backpacker building with no immediate south side of the road retail area;  and Cambridge Terrace (AKA Durham Street) between Worcester Street and Cashel  Street beside the river park,  offer excellent spots - the latter heading directly into the Bus Exchange - where some passengers can alight and longer queues of buses (perhaps one day elongated light rail vehicles) can bank up with minimum disruption.

Access to most parts of the CBD within a short walk are offered by both pink and orange lines, leaving just supplementary bus routes and The shuttle to connect these dots.

Although we are by no means as big as Ottawa or most cities with light rail or trams, getting mass transit systems into central areas in a way that is passenger friendly but preserves the pedestrian friendly centre is a challenge to be faced. The pattern here extends the Bus Exchange's reach in a way that is largely non-obtrusive even with large numbers of vehicles, or larger buses and (perhaps one day) trams.

NOTE; The idea that Christchurch can reduce inner city car congestion by a series of concentric ring roads (some already in effect) is explored further in a previous posting, which suggests the city has a rare chance to build a ring road across ST Martins, Beckenham and Spreydon
Posted by David Welch at Monday, July 25, 2011