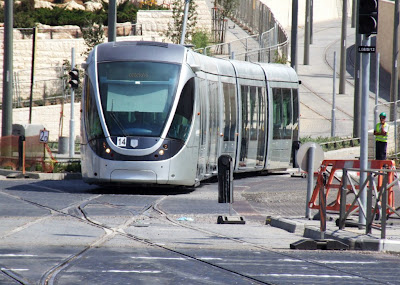 All that glitters is not gold - a Jerusalem city planner identifies how much distortion of local bus system and roading patterns is needed, and how little this expensive glamour rail project will serve the needs of most Jerusalem residents. Photo Wikimedia Commons

Tranzwatching an exposure of light rail spin in Jerusalem, Israel

Gerard Heumann,  an architect and town planner in Jerusalem, examines that city's new 14km long light rail system (corridor) that took ten years to build,  cost (in Euros) 72 million per kilometre and is due to open August 19th 2011. He describes the various ways it fails to benefit most Jerusalem residents and runs contrary to good planning.

Most of Heumann's specific observations could be equally applied to many other light rail systems elsewhere in the world, or to indeed to building such a white elephant in Christchurch.