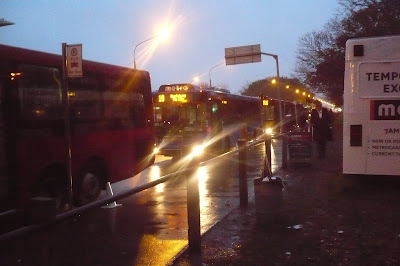 Five months after a disaster,  a continuing disgrace to Christchurch
- transport authorities unable to rejoin even the most basic dots!

Although "old news" in Christchurch, today's Dominion Post  notes that Redbus is selling 24 late model Designline built MAN buses for use by NZ Bus in Wellington - essentially it seems an exercise in asset stripping to stay viable.

In the larger "spiritual sense" this blogster believes this represents yet a further step in the degradation of public transport in Canterbury and the continuation of a long trend of transferring the "transit wealth" northwards to Wellington and Auckland.

Transfer of Canterbury "public transport dollar" northwards has been single biggest achievement of transit governance and local authorities in Canterbury over the last decade!

The city and district councils of Canterbury have stood idly by for over a decade, allowing over $250 million of "public transport allocated" dollars in taxes, paid in Canterbury (13% of NZ population) to be shifted north, across Cook Strait, to fund commuter rail, regional rail and bus, and busways in Wellington and Auckland.

Barely a voice has ever been raised in protest and never has any significant research, development and strategic development of mass transit, in anyway equivalent to that  implemented in Auckland or Wellington been developed in Canterbury.

Even a rather sickly policy of low level part time, part route on street bus lanes has been stymied, sent back to the future,  after only a third were built! Opportunities to shorten and strengthen routes, widen roads to include "queue jumper" lanes, acquire property to build bus rapid transit corridors, building suburban bus stations, bus priority at traffic lights - all projects needing modest funding (tens of millions rather than hundreds)  have been passed over and over. Even putting a simple, low cost bus tunnel under the new motorway to serve a major industrial area passed by the collective wisdom of public transport leadership ion Christchurch. As did regional commuter buses, even though Canterbury pay about $4 million towards Wellington's regional services!

I mean - just how many days does it take to find an adequate stretch of roading away from private houses or danger zones and restructure road management to allow buses traveling in both directions to operate an (two way) exchange system??  And it doesn't need to be central city - that's a separate issue.

The point of an exchange is that it mediates the free flow of bus journeys across the whole city.  Access to a walk in catchment is useful but hardly a key issue. Certainly not an issue for those five months later still being cheated of a 15 minute service at dozens of locations across the city, increasing missed buses and adding hours of potential waiting to their working week,  and others spending two hours to travel 10 kilometres because of the bizarre multiple transfers needed.

Given the status of the central city with virtually no larger office complexes and few retailers operating, adequate shuttle services around safe areas is the issue here.  Businesses outside the red zone need city support to get back on their feet, inner city residents need some way of getting out of their areas to work, or shop or grocery shop. And why dump The Shuttle, just when thousands of inner city residents need it (albeit re-routed) and when linking re-activated parts of the inner city to current bus routes and transfer points is the key priority.


That Redbus is having to strip assets and sell very late model buses to Wellington is just par for the course!

At last the company is figuring out how public transport is managed in Christchurch!

But fear not the Christchurch Tramway system will be saved, eventually pointlessly routed to a sports stadium used less than once a week (if it survives)  and lo, light rail shall descend from heaven!

And magically bus patronage shall rise to 30 million passengers per year,  just because ECAn says it will.