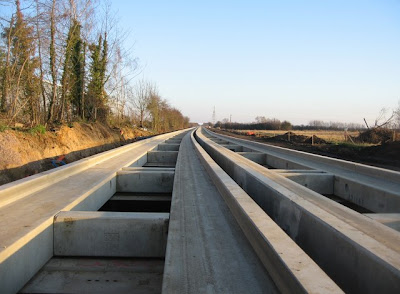 Few public transport projects - rail, tram or bus - have had quite such a topsy turvy up and down ride in the making as the saga of the world's longest guided busway built between UK university city Cambridge and surrounding small towns, utilising the corridor of land of a former railway line. Even now legal action between replaced construction firm BAM Nuttall and the Cambridge Council continues.

But the busway itself ....due to open for use in about three weeks ...the effect of combining latest buses with a preset concrete guide track ....according to veteran Stagecoach bus driver Mike Capper, “It’s a fantastically smooth ride now compared to when I started driving all those years ago. It’s amazing. The A14 or this? There is no comparison.” 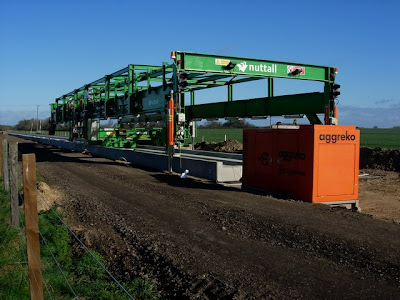 A moving track laying machine for guided busway concrete guide rails created by BAM Nuttall. . I would imagine the potential of such busways to be used by trucking companies, including oversize road trains at night after bus services cease, can not be ignored. In  effect this finds middle ground between rail and road in freight as well as passenger traffic. With hundreds of kilometres of disused rail corridors in the UK this busway is also seen as a significant experiment, watched with keen interest by British transport operators and authhorities, incuding the Transport Ministry. (Photos Thanks  to Wikimedia Commons)
Posted by David Welch at Wednesday, July 13, 2011