Auckland Transport is hoping the New Zealand Transport Agency will include Bus lanes in its Road Code.  In Auckland as elsewhere, particularly before the last round of amalgamation, bus lanes have been developed in an ad hoc way, with different signage and standards, such as placement of signs. Currently they are reviewing the whole system.

Now that Auckland is tidying up its act does indeed seem a  a good time for New Zealand as a whole to create a codified set of design standards, usage criteria, expectations and may be even a systematic scale of fines for entering Bus lanes in inappropriate ways.

To the motorists of course - who can't bear to see an adjacent lane empty even for 30 seconds - it all seems very petty but any technology that can bring buses as close as possible to running on time is a primary technology of public transport....once buses can consistently and reliably maintain schedules then they can also pass through transfers points in a consistent pattern. This in turns means a huge and the chance to actually attract significant patronage including peak hours reducing congestion queues of cars.

I like the signage put forward here - it echoes concepts I raised in this posting about widening city streets (even along part sections of a city block where this is possible) to include parking bays, a "parker crawler bus lane" as shown in the rough sketch below. 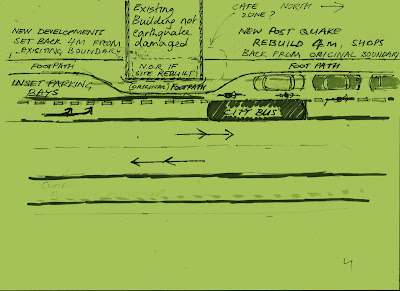 Bus, cycle and parking traffic is removed from mainstream flow
with adequate room for cylists (not well conveyed here!)
[N.O.R. = Notice of requirement. Should a building in a location of this nature ever be demolished and rebuilt it will be required to set its frontage back a few metres, on the new boundary with owners compensated]

Ideally a standardised national sign could show a sign similar to this one on the link as above but with indication of parking bays on side of road and more parking around next left at end of block, and that the lane is intended only for those seeking parking, and a left turn ahead, with buses and bikes only allowed to go straight ahead (on a "queue jumper" pulse of the traffic signals and/or at the same time as normal laned traffic.
Mainstream traffic would not be permitted to change lanes within that block (the double arrow symbol on roads in diagram)

This latter sounds a weird mix but I think it could work well in some situations, subject to checking overseas studies or doing trials, if the length of time for parking (30 minutes or one hour or whatever; the number of bays in each block, and the number of buses using the bus lane per hour were in correct balance).

In peak hours traffic signals could forbid (red light) any further parkers entering the lane, without have to police or remove parkers already in bays. In normal middle of the day traffic u to, say, 15 buses per hour (one very four minutes) could use the lane and if there were 15 one hour bays on thart lost by buses presuming most parkers would not pull out if they can already see a bus in the lane in their wing mirror. Having slightly longer than normal parking bays (that in many cases can be driven into rather than reversed into - or if reversed easy to enter - could also be a factor. Adding up the total equation including the bus and bikes at lights have (a) queue jumper time if re-entering conventional flow or (b) normal straight ahead time without queueing and/or priority phasing of traffic signals, it could reduce overall journey time, increase reliability and increase perceived status and permanency of buses.

Somewhere in here there seems potential for a win-win-win-win situation for retailers/businesses/for local authorities to still obtain parking income/for those looking for a car park (in the bays or if none available - anyway indicated by an overhead electric sign before entering the lane) around the next corner to the left. But the real winner, is buses and cyclists getting a full time bus and bike lane  - and one only shared by a marginal traffic flow - separate from the mainstream traffic flow.
Posted by David Welch at Monday, July 25, 2011