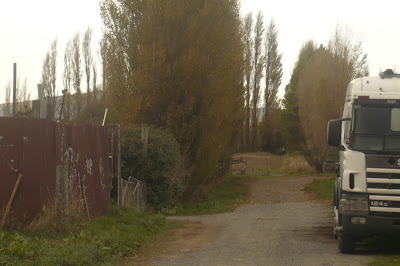 This area and that behind the fence was the best bit of "wheel estate" in Christchurch. It was pivotal - quite literally pivotal - in the future of public transport in Christchurch. From this point almost a fifth of the city's geographic footprint and towns north of Christchurch are serviced by a pattern of express buses and full-time BRT corridor buses to and from Redwood, Belfast, Styx Mill, Northcote and the Airport-Johns Road industrial areas that developed. It was realised that purchasing this area could enhance the lives of tens of thousands of residents who never actually set foot on it, removing most the traffic stress of congestion as buses whizzed in and out to town by-passing Papanui Road and Cranford Street, served by conventional routes.  It was redeveloped as a beautiful park running between Rutland Street and Grassmere Street, with a fenced off busway embankment around the back.
Here is another view of this land, as it looked in 2010, over to the left of the photographer in terms of the above photo 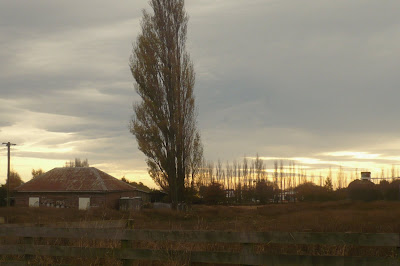 In the far distance can be seen some big box retail buildings that were on Cranford Street, though this style of shopping has gone out a great deal.  Everybody in the city knew this bit of land, the paddocks to the westside of the road at the top of Cranford Street but usually people saw them from the Cranford Street side only. This photo was from Grassmere Street. They still make a delightful break in the built-up area, especially for busway passengers heading in and out of the city - sometimes they have rolls of silage or hay spread across the freshly cut fields, like a scene from a Van Gogh painting. This in the middle of a busy city! They could never be built upon or built out, because they are a flood plain - a depressed area (but happy to be depressed if you know what I mean) that in times of heavy and persistent rain will offer a big soak pit, much needed ina city built upon a swamp. 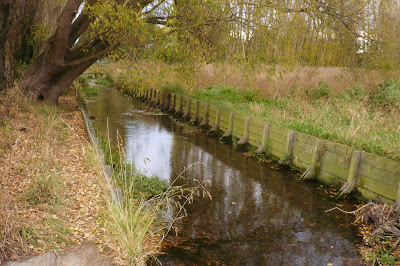 Quite apart from any momentary flooding, the access to a steady stream of water, at the top of the former Rutland Reserve allowed a wonderful opportunity for a water feature the length of the northward extending park, a meandering stream which many of the people from the older persons housing and retirement villages nearby enjoy strolling along and sitting by as they chat on park benches. Below is a primitive map from years ago - it certainly brought home to any observer how the busway cut straight down between two of the busiest city arterial roads, Papanui Road and Cranford Street, completely by-passing the congestion and much of the stress feeling of rush hour. 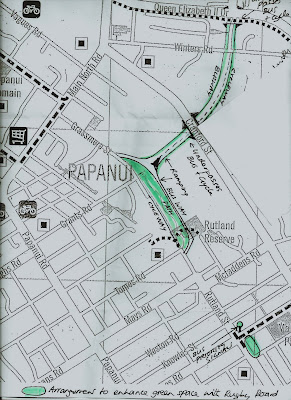 It probably didn't not look like a jewell in "wheel estate" when the photos up above were taken but was a priceless asset just rescued in time. Two or three properties at the Rutland Street end of the busway/Rutland Park had to be purchased, but the houses themselves were able to be moved to other sites, already treed and landscaped ready to accommodate them. It proved to be a busway of astonishingly minimal social disruption, in the making, in the number of residents directly effected, in the ongoing social impact - and has been to the benefit of hundreds of thousands - indeed millions - of commuter trips across the decades since.

In 2030 our time-travelling rabbit - well into his seventies - went for a journey on this same busway - albeit being inclined to wander in his thoughts, the old bug-head travels via the Hutt Valley railway station, Manor Park, in  1965 and the Edgeware electric tram in 1910!!
See article below (he does rabbit on!!)
Posted by David at Sunday, May 09, 2010