In a world where infrastructure projects of all sorts so often run over-time and over-cost Johannesburg' giant Rea Vaya ("We are moving") Bus Rapid Transit System (BRT) network is coming into land, all wheels out and ready, as planned for the World Cup in 36 days time.

The bus rapit transit (or busway) system was chosen as most cost effective mass transit system for the modern era and for a country with South Africa's level of wealth (not so huge now apartheid has ended and infrastructure needs to be built to benefit and support all people, not just a minority sector). Commuter rail already exists between Soweto and industrial areas but does not cover large areas of the city or access the CBD. It would have been hugely expensive and socially intrusive to retro-fit commuter rail without achieving a particularly wide spread of services. Light rail would also be hugely expensive and due to the prohibitive cost per kilometre also circumscribed in its reach.

The City of Johannesburg - metropolitan population 3.8 million - instead  has chosen to build 330km of bus rapid transit corridor, based upon having middle lane busways completely segregated from other traffic. Rather than traditional bus stops there will be more widely spaced enclosed bus stations along the routes and a control centre similar to a rail control system to ensure an even and regulated bus flow. These unimpeded corridors will carry high tech low environmental impact buses - the trunk routes mainly articulated buses with 112 passenger capacity  - to transport passengers comfortably and quickly around Johannesburg without having to compete with cars in many areas. The buses will have street level doors but those that travel only on the Rea Vaya trunk routes - including articulated ones,  will have doors, both side of the vehicles, cut at a height to allow  platform level entry at bus stations.  A system of feeder buses to Rea Vaya stations will link outer areas to the 330km of main route. Buses will operate at two to four minute intervals during peak periods, and seven to ten minutes during off-peak periods. The system will be operational from five in the morning to midnight.

This system - inspired by the success of similar ones in South American cities - was planned several years back to be ready for the opening of the 2010 FIFA World Cup  South Africa is hosting.  What is even more surprising is the tough environment in which Rea Vaya is being built. Presumably a legacy of apartheid Johannesburg bus system (Metrobus) has only been carrying about 20 million passengers a year - little more than Christchurch buses. Apart from the rail system, a very high proportion of commuters depend upon informal, chaotic  mini-bus taxi system which in some cases operates on the margins of safety and legality, and has seen violent "turf wars" between competing taxi groups. Most but not all the taxi federations have excepted the proposals of public transit authorities, designed to help drivers shift to other transit occcupations, given that Rea Vaya will drastically reduce patronage of minibus taxis. This has led to violent strikes in which bus depots were barricaded, tyres burnt and stones thrown at buses. More recently shotgun attacks on Rea Vaya buses have led to several injuries and a recent death. In the other some parts of the planned system have brought NIMBY resistance from wealthier communities.

Despite all these factors the City of Johannesburg has been determined to push ahead. Rea Vaya will be 33% bigger than the tramway network in Melbourne (a city of similar population 4 million). As buses can operate much quicker than trams and will not have share on-street lanes, the potential of Rea Vaya is to create a new benchmark for segregated lane busways as the most cost effective and user friendly mass transit option in almost every urban situation, but particular the lower density cities of the "new world" including New Zealand. 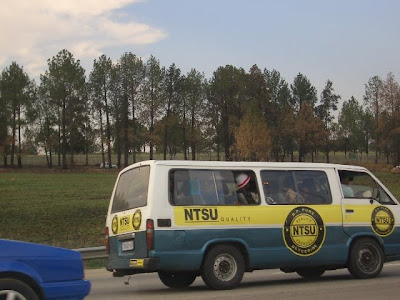 A minibus taxi in Jo'burg typically of the hundreds that sprung up due to an
inadequate public transport system in past years - Source Wikimedia
Posted by David at Thursday, May 06, 2010