It must be among the world's most dramatic spurts in public transport use. Busways appear to have been a big hit where ever they are built but it would be rare for any system already well established to achieve a 20% growth in ridership in one month!
More Aucklanders are jumping on trains, buses and ferries.

There were 918,000 train passengers last month, up by 14.3 per cent, according to figures released by the Auckland Regional Transport Authority (ARTA) today. ARTA will put two more trains into service later this year to deal with the rise in demand. Bus passenger numbers are also up 5 per cent. The rise comes as Northern Busway users climb by 20 per cent in the month of March alone. Ferry users have also increased by 3.5 per cent over the last nine months.
The NZ Herald (4 May 2010)


The Northern Busway service runs from Auckland's CBD, over the Harbour Bridge and up the side of the motorway spine to Albany.  The busway first planned back in the late 1990s was originally expected to cost $130 million (NZ Herald 25 November 1999) but mushroomed across the years to cost $310 million - $200 million from Transit NZ (now part of Transport Agency NZ) and the rest - mainly towards the cost of large park-and-ride stations, from local councils.
It first operated as a partial service (using the motorway itself ) in 2005 and opened with a mostly segregated 8.5 kilometre busway in February 2008. About 70 buses/hour use the busway during the peak morning period but the busway is designed to accommodate up to 250 buses/hour by 2016.  Of bus services using the busway, some travel the full 18km journey  Albany to Britomart stopping at all stations, others only stop at some stations, and sections of the busway are also used for internal services bewteen areas on the North Shore and to and from Takapuna. Buses depart during peak period every three minutes. 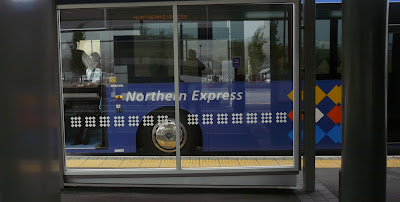 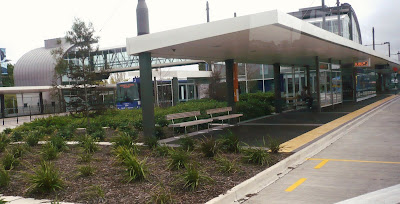