And now for something completely different.....on yer bike. in Trondheim and Oamaru

Friend and blog correspondent Louise sent me some photos of a bicycle lift in Norway
Hmmmmm...will Christchurch's Metro up for putting  one of these on Hackthorne Road? I suspect not...
A comment on the blog that carries these  photos said ...."I was in Trondheim a few years ago, and it seemed only old people or fat tourists used the lift. Most of the locals would cruise up the hill like it was nothing".


We only have one set of hills near Christchurch - not being an athlete I find it macabre that so many people want to get up early on a Sunday morning, don garish gear and ride up the very steep Cashmere  area roads onto the Port Hills.
However I imagine I am one of the very few people in the modern world to have ridden a draisienne - the very earliest form of bicycle invented by Baron Von Drais (about 1819). You just straddle it and stride along, it is faster than walking on the right terrain, once if you get the hang of it such as this young "gallant" in the picture below 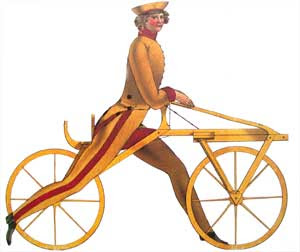 Thanks to the Bikefix.co.nz website in the UK, I'm sure they won't mind me stealing this image for a couple of seconds

The unique chance to ride this machine -  such an historic wheeled vehicle, virtually the beginning of the modern age -  arose while visiting Oamaru with a group of friends.
It is a town I stay in often, quite the most magic, beautiful, walkable little town,and rich with scenery, nature and history, The wide main shopping street - trees down the middle like some big hearted wide-verandha Ozzie country town - suddenly turns into something far grander and more elegant, indeed more so than most cities much larger.  Oamaru has  a distinctively old fashion European ambience in its old quarter full of grand old carved limestone buildings. Also filled with more than a few eccentric or unique characters! You'll find them easy enough in the various shops, cafes,galleries and pub in this part of town!  [I include a few photos at end of post]

The draisienne is a replica displayed in the latest attraction in Oamaru's historic quarter.This a marvellous little vintage bicycle museum, shop and headquarters of their active penny farthing (etc) club "The Oamaru Ordinary Cycle Club".  I don't know if they intend to let every tom fool and his dog ride the draisienne but they must have instinctively realised I might be an esteemed writer on things transport and generously plonked it out on the road for me take a spin! As the Bishop said to the actress getting my leg over was the hardest bit. Of course reality is somewhat more humdrum than the young message boy with with rouge on his cheeks and tiny feet racing to a date with a person of ambiguous gender in the photo above. My ride was more dedicated to staying upright and not falling off from laughing too much!! But as you can see stripped of my normal lean mean carrot munching wabbit costume I cut a most gainly figure on wheels. Yeah right.
Come on mate. on yer bike,  or whatever you want call it 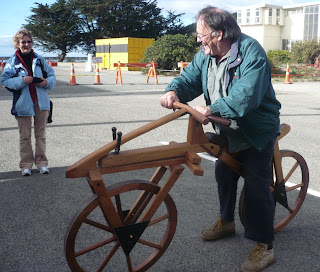 Ps I'd show more photos of Oamaru but too many people might want to go there.... 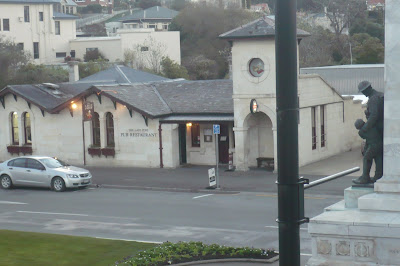 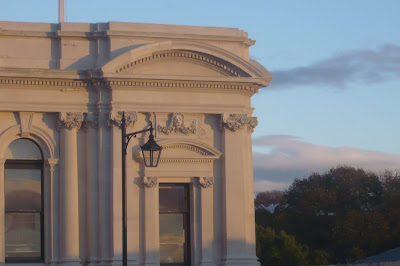 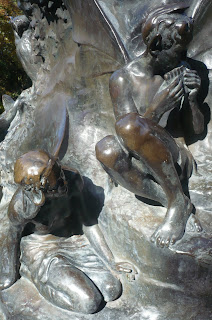 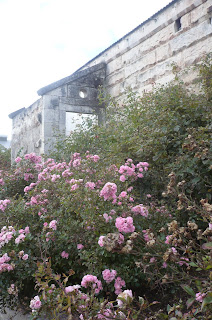 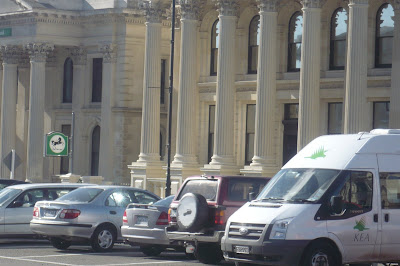 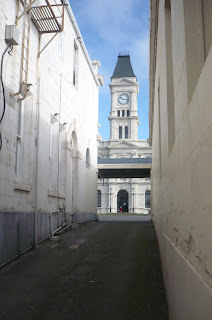 Photos ; from top First post office (now restaurant), in front the unusual and touching war memorial statue; corner of the second post office in early morning sun; fairies part of the many enchanting details of the "Wonderland" statue in the brilliantly designed botanical gardens; ruins of old 1867 gaol and stables; view towards the clock and bell tower of the second post office (now Waitaki District Council office - the bell still chimes out the hours, and each quarter hour, in dignified manner); National Bank and former Bank - now the Forrester Art Gallery, a gallery on par when any city gallery and the inside of building itself is a masterpiece of Victiorian grandeur! All photos from RabbitPress
LAST BONUS SURPRISE _ CLICK ON TITLE BOX ABOVE TO CATCH OUT "ORDINARY" BOY RACERS
Posted by David Welch at Tuesday, May 18, 2010