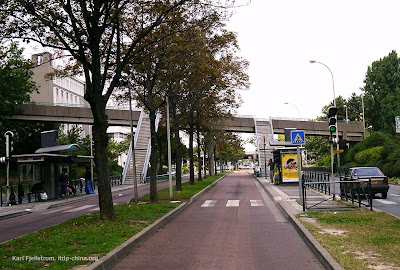 Busway infrastucture in Paris; Is Christchurch trying to get on to a train
that has already left the station, historically? Click on images to enlarge.


According to the agenda of a recent meeting of the Christchurch City Council on Thursday 26th May,  the Council is intending to make a submission to the "Government Policy Statement on Land Transport Funding 2012/13-2021/22".  In the section on public transport (2.5.3) the submission notes;

Metro Rail; The Government has made major investments  to upgrade, modernise, and expand metro rail systems in Auckland and Wellington. Despite being New Zealand's second largest city, no investment has been made in the development of metro rail or light rail in Christchurch or the Canterbury region. The potential role of the rail system in revitalising the economic centres of Christchurch should be recognised.


Comment; A slow train coming, that one.  But why just rail? NZ Transport Agency and Transport Minister Stephen Joyce are now putting pressure  on Auckland City to make a longer more careful examination of bus lanes, tunnels and bus priority measures as an alternative to the hugely expensive underground rail tunnel. The clear inference of this is that the Government will come to the party on helping rapid bus infrastructure ....and if in Auckland, surely also elsewhere?  Indeed why would rail or light be of much value in Christchurch when we need direct rapid transit routes to about six major outer growth areas, as suggested here or between major areas as here.


NOTE This is only an agenda seeking the elected council's rubber stamp. Of course may be I misjudge and when the Minutes of this meeting come out I will find bus mentioned also.  I will be pleased to apologise profusely. Yeah right to that scenario happening.  I  suspect not. Certainly our planners opted to leave out "bus" and I saw no media coverage about disputes on the wording here.
Posted by David Welch at Sunday, June 05, 2011