Railing against the odds 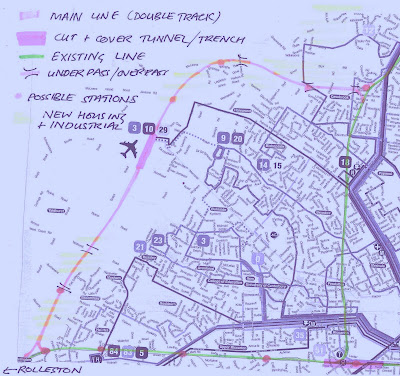 Currently the city council is running a North-West area review consultation. This concerns mainly the land between the airport and the city's current edge, from Styx Mill down to near Russley.  Simultaneously the Council voted last year for the CEO to organise a study of rail options for Christchurch.  I believe that both of these review parties should be getting a professional evaluation done of bringing rail into the city via a western rail corridor, more or less along the lines suggested above. I have no background or deep understanding of rail but the inherent potential of this concept (versus the current minimal Belfast-Addington link which has no real future proofing) seems far too strong not to be examined in greater depth in consultation with Government, KiwiRail and both major political parties. The concept of an upgraded double tracked freight corridor also appears consistent with the current government commitment to developing an upgraded "Auckland-Christchurch" rail corridor.

A scenario such as this above would probably mean the majority of freight, long distance passenger trains and commuter rail from the north would loop into the city via the Airport (and just as importantly associated industrial zones) and down through Islington, Hornby, and Addington. It is suggested that all the ingredients (the bare bones unscathed by an earthquake) for a multi platform rail and long distance bus centre could be built around the old goods shed immediately beneath the Colombo Street overbridge. 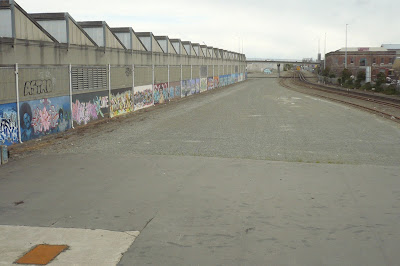 Potential "state of the art" huge covered open space, for markets, concerts, and  including through rail to Lyttelton and (safely separated)  a city central Christchurch rail terminus -  a central motor force for Sydenham revival?


This may have potential as part of the Sydenham revival (not least because higher density apartments dwellers in that area would have excellent access to several major work zones by rail) as faraway as Rolleston and Rangiora. There could also be added eastern stations at (formerly known as Lancaster Park) and at Ensors Road with obvious value  for CPIT Sullivan Avenue campus and The Orbiter links.

The suggested western rail corridor could be built from scratch across what is currently essentially bare land (though temporary housing might be built on sections until needed) this line would ideally be double tracked all or most of the way and be completely grade separated - no need to reduce speed for  level crossings, no potential accidents with motor vehicles etc. Future housing areas could be planned with the rail link central to design, even if the line itself was not built immediately. Passing the airport area would be done by excavating Orchard Road down to create a dig and cover tunnel, with possibility for a 24/7 segregated freight only through passage and a separate underground passenger rail platform, glass doored off. About a kilometre of trenching of this nature would be needed, similar to that undertaken at New Lynn in Auckland recently. 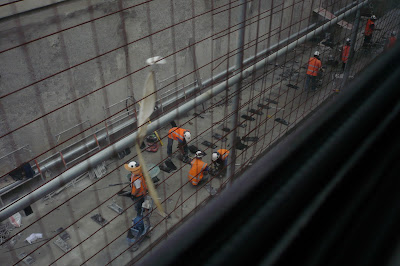 Workmen preparing to lay railway lines through the newly built New Lynn trench in Auckland Feb 2010
Although this added loop from Styx Mill (Barnes Road area) to airport zone and  Islington and then turning towards the city (on existing corridor) to city extension involves adding 10 kilometres to the northern access it links many existing and new residential and work areas (from Rolleston or further south and Rangiora and all areas between), allows fast trains and heavy trains to move quickly in and out the urban area with far less disruption and allows freight to flow straight from Lyttelton northwards (or vice versa) without reshunting. Potential exists to create a complete new marshalling yard, if needed, at (the aptly named) Islington Junction. For commuter trains it would allow various options for a co-ordinated pattern of fast access in any direction, with transfer points at Islington and Belfast. While it is impossible to even guess the cost-benefit ratio of this proposal, it is certainly likely to have multiple benefits and the cost (in the low to medium hundreds of millions?) would be consistent with rail expenditure in Wellington and Auckland.
In defining the long term strategy and protecting the designated corridors for future use, the adoption of such a strategy would place Christchurch on the mass transit foundation needed to carry it through the coming century.
All been said before in NZ in Tranzit (last time the late Johnny Cash even sung the intro!) -

Railing against the odds?  As usual.
Posted by David Welch at Wednesday, February 16, 2011