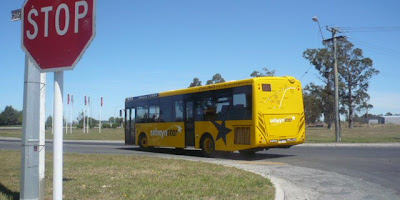 According to the Urban Development strategy Newsletter, December  2010 "Environment Canterbury and Leopard Coachlines moved 'heaven and earth' to ensure the new Selwyn Star services began in November, despite other unscheduled earth movements. The original plan had been to to roll out a fleet of brand new, locally built, Selwyn Star buses at the beginning of November. Instead the bus builder's factory at Rolleston was badly damaged by the Greendale-earthquake so delivery to thirty-two new bright yellow state of the art buses has been delayed until early next year" ....and are now appearing on the road.
This one spotted turning from Waterloo Road (the country-quaint fast track to Rolleston) and heading back onto the main road just before Rolleston itself.
Posted by David Welch at Saturday, February 12, 2011