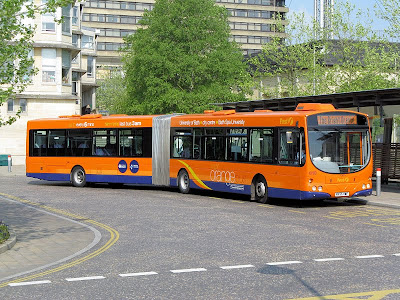 I have finally got round to making a Google "My Maps" map of the Northern Busway that I have been suggesting for over seven years to various Mayors and Councillors and Ecan planners and Councillors!!

It is a pretty crude map - "My Maps" is a hard art to master without going insane, especially off road bits, and I have a long way to go on this learning curve but NZ in Tranzit readers (especially locals) can hopefully get a broad idea, particularly the simplicity, directness and use of bare land combined with secondary feeder streets.

As creating bus or rail (or indeed new roading) alignments through existing built up areas go it seems to me about as minimally socially disruptive in building and operation as is possible whilst sill serving major existing and planned population areas and high traffic generating facilities. It includes some embankment and ramping, a bridge over the Styx, an overpass and an an underpass (all of which could be single lane - with speed modification indicator lights some distance out from each bottleneck allowing buses to interact without needing to stopping.) Apart from that the work would mainly be building stations, on street traffic islands and traffic lights and strengthening and resurfacing some streets to give maximum smoothness, minmum local vibration.
I wonder if it could be built for under $100 million, with added landscaping, particularly if tied to things like building the Northern Motorway or reshaping Rutland Reserve to become a far more attractive cycleway/park etc. As usual the real priority is to decide the alignment and protect it - everything else can wait.

If for instance, a developer buys the Edgeware Pool site from a voluntary swimming group that I suspect is already out beyond their depth, and builds a multistorey housing complex, access to the North on this alignment (and is there a better one?) could be lost forever.