Ripe for a bus lane? 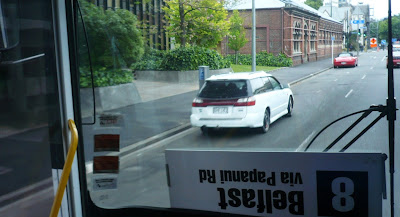 The Ecan-Christchurch City Council joint strategy on bus lanes seems to be very orientated to grand productions - route by route, bus laning all the relevant sections of a particular route (which also often benefits other routes using the same piece of road). Perhaps the grand production with full trumpet introduction was needed in the early stages, but if future if lanes are built from this approach seems rather ponderous. Some routes will not be bus laned until 2019 according to the strategy adjustments made after the National Government came to power and Transport Agency NZ cut the minimal funding allocated to Christchurch (ignoring tens of millions still in the process of being spent in Auckland and Wellington).
It is my belief significant gains can be achieved by "hot-spotting" - identifying sections of road where a significant number of bus services are delayed, and widening or adding a "queue jumper" lane for buses travel straight to the front of the queue at traffic lights, and get a 10 second advantage signal to get ahead of the traffic. These may or may not be part of some future planned full route length bus laned route - the important thing is they address a major choke-point now, when budgets might not extend to larger projects
In my recent campaign for the Mayoralty (BTW I was unsuccessful, I put this down entirely to not registering or advertising that I was standing) (of course) I identified Adwins Road between Harrow Street and Linwood Avenue as a classic example. This road will be on the long term strategy to bus lane The Orbiter route (where appropriate) but the sheer number of buses routes feeding out of Harrow Street onto Aldwins Road - and the degree to which most are stuck in a traffic queue, particularly 3.30pm-6pm - suggests this be a now rather than later priority. This might take some major engineering particular if long term provision is made to purchase properties on the Harrow/Aldwins corner to give an ALWAYS free turn for buses, into their own lane OR if the intersection at Linwood Avenue was widened by re-landscaping the small grass verge with birch tree and cell phone tower to create a fourth lane (a cheaper option might be sophisticated traffic light system able to "read" the number of buses for straight queue jump advantage and/or cars turning left in the same lane).
Probably far less expensive - and I would imagine very attractive in any cost-benefit ratio study- is a short but highly valuable stretch of Durham Street, running between the bus stop outside the Salvation Army building and Armargh Street. This section of road is part of in-route towards the city and bus exchange for all buses from the Casino stops (including 28 route and The Shuttle), all buses from Papanui Road (including 90 Express from Rangiora and routes 8,10,11,12, 18, 22 ). Ironically the car parking along this short stretch of road (about ten curb side car parks?) is rarely used during most the morning peak hour - but as in the photo above it only takes one or two cars to block a potential bus lane! In my experience the one-way street here often gets clogged up in morning peak hours and buses are amongst the vehicles queued to get to the lights. [The bus in the photo above has a more or less clear run to get into the left lane but many others in peak hours do not get the same freeflow opportunity]
For want of a bit of green paint and a couple of signs I can't see why any bus needs to be held up along this stretch before 9am! And possibly in the evening peak too.
And even more interesting possibility is that this laning (at least for mornings) could continue down past the Provincial Givernment building and continue alongside the river, along Cambridge Terrace/Durham Street as far the Bridge of Rememberance. This would allow buses to come into the new or existing Bus Exchange - indeed a subtle traffic signal for buses only along the corridor could control the the inward flow. When Sydney built its first bus rapid transit corridors buses apparently funnelled off the busway, straight back into congested city streets, much of the value of speedy access to the city was lost. The long term potential of extending the bus lane suggested here - from Peterborough Street to Lichfield Street is obvious, and in the case of a Northern busway would allow easy use of articulated buses.
Posted by David Welch at Saturday, December 04, 2010