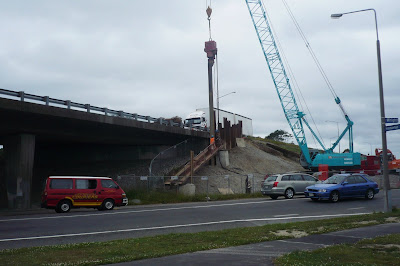 The photo shows pile driving beside the existing motorway overbridge in Wrights Road (between Lincoln Road and Blenheim Road area) in Christchurch. As well as adding an overbridge at Barrington Street and extending the southern motorway southwards past Hornby current government and city plans are to double the width adding two more lanes and piles being driven here will be part of future pillars.

A major feature of the proposed new motorway - presumably a deliberate choice - is not to take the opportunity to give public transport added supportive infrastructure by adding a bus only underpass (beside the cycleway underpass). This leaves future bus services to fight traffic and queue with all the other cars using the relatively few underpasses planned for north-south traffic across the alignment of the southern motorway and/or trying to access the congested Birmingham Drive-Parkhouse industrial enclaves. Indeed Metro gave up running buses to the latter areas, I was told by a high placed Ecan officer some years ago, because congestion was so heavy buses could not keep to schedules and consequently failed to attract patronage, although it is part of the largest employment zone outside the central city!

The opportunity to create a bus only tunnel (or trenching and underpass) between Annex Road and Birmingham Drive and then ultimately another under the railway yards through to Middleton Road , the university and the airport has been rejected at huge future cost to the effectiveness and speed-of-access of north-south public transport on the rapidly growing western side of Christchurch, from west Belfast to Halswell.

Several City Council's lead by Mayors Garry Moore and then (and now) Bob Parker have been remarkably blind the the development of busways around the world - segregated from normal traffic in all or (more commonly) part of their journey. Done well this can give buses huge advantage in offering fast, direct access between different areas completely by-passing many congestion sticking points. Busways can be expensive into the tens of millions to build (depending on the infrastructure options chosen) but are far cheaper to build than adding conventional roading or light rail or heavy rail options. Christchurch with its radial spread is far better suited to multiple busways and added express bus lanes or segregated corridors (cutting between existing roads) than a one-off light rail corridor that would benefit only a small portion of residents. In particular busways that "cut through" the inner suburbs - 10 minutes to city centre from Breezes Road; from Northlands; from Hoon Hay Road etc could "tie" the city together, keeping alive the city centre as a venue and specialty shopping and recreational centre.
The idea of buses as "poor cousins" of the car is legacy of the late 19th century, fast being outdated by concepts such as bus rapid transit and the improved quality of buses. But once again a rather absurd pre-occupation with light rail by city hall (absurd because it is a technology that is far too expensive and irrelevant for small low density cities such as Christchurch) has cost the city opportunities to create a genuinely quick and frequent sophisticated link across suburbs.

Despite this Christchurch people keen to see public transport move out of the 20th century "good enough for the peasants" thinking and into a more sophisticated, direct fast mode, are being offered a chance to invest in a busway anyway, this one proposed in Auckland!! And it is not a ponzi scheme! (Not even a ponzi scheme scurrilously linked to the front page image of Alan Hubbard! - I am not particularly a Hubbard fan but what a disgusting piece of journalism!).
No the investment will be by painless removal at the time of taxpaying. This will occur in the same way Canterbury taxpayers contributed 13% of the almost $2 billion already spent on public transport infrastructure in Auckland. eg Britomart Centre - Canterbury taxpayers gift $26 million; double-tracking and upgrading Auckland suburban rail lines $78 million; electrification overhead wires etc $78 million; Northern Busway - Canterbury gift $26 million etc ...and lots more, smaller amounts.