Risk to pedestrians and added stress for bus drivers 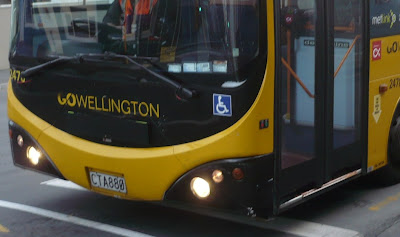 Given the millions of kilometres driven each year by the thousands of New Zealand bus drivers without accidents it is staggering that three pedestrians have been hit by buses crossing the bus lane's installed through Wellington Manners Street mall in less than a week!
Some clue as to how such a crazy situation could arise is hinted at in this newspaper article from Monday's Dominion Post. I admire one of the bus drivers involved, going public, being open and honest. I also feel for him - after 17 years driving a bus what a shit house thing to happen! It sounds to me he is a victim too - of poor design.
The newspaper reports " He was travelling at about 15kmh, and stopped scanning the area for "a split second" to focus on another bus coming toward him down the narrow roadway".
It has always amazed me the same situation does not arise in here Christchurch. The redesign of Cathedral Square left these absurdly tight lanes where buses often have to stop just to let each other pass. The footpath (or is it a footpath it is so hard to read what it is meant to be!) running alongside the road lane on the north of the Cathedral means buses virtually rub shoulders with pedestrians. Many of these appear to be tourists, somtimes walking two abreast or blithely unaware of the bus coming up behind. Even a minor slip or friendly jostle could see them side-step straight into the bus's pathway. I have always thought (along with the ugly white-grey tiles in the Square) this was a piece of truly appalling design by the Council.
The irony is that any minor rebuilding in Christchurch usually carries a hefty price tag because those building are required to meet some health and safety and disability hard line requirement - such as installing a shower with wheelchair access if altering existing staff toilets (as happened at one place I worked) although the showers were not even used by able bodied staff. Yet the whole design of traffic lanes through Cathedral Square seems to me to be a health and safety issue, not least for similar reasons to that applying in Wellington - it is difficult to scan read the whole roading area effectively (and bus drivers need 360 degree awareness) if concentration is momentarily diverted towards such absurdly close encounters with passing vehicles.
Also perhaps a good case for bringing at least some buses entering the city from the east (such as routes 60, 70) straight along Gloucester Street and down Durham Street to enter the bus exchange from Lichfield Street, with an added useful stop near Worcester Street, the Arts Centre and new Council HQ. A step towards "claiming" the east side of Durham Street beside the Avon River embankment for bus laning (see last comments in Ripe for Bus Lane) and eventually a busway corridor.
Posted by David Welch at Wednesday, December 08, 2010