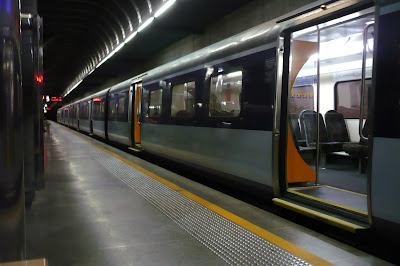 Following on the success of the stylish underground station at Britomart, to which Government agencies contributed $200 million, and the $48 million rebuild of Newmarket Station as an impressive multi-level, multi-track complex [see previous posting for other photos]  Auckland is a step closer to another classy underground station. Earlier this month the first train ran along the New Lynn trench, soon to be home the $160 million New Lynn underground rail and overhead bus centre. To overcome the long standing problem of the railway line dividing the centre of New Lynn,  in the head of KiwiRail, Jim Bolger's words, "like the Berlin wall", and the prospect of ever increasing traffic delays and congestion at complex rail crossings as Aucklands suburban trains become more regular, it was decided to put the newly double-tracked rail corridor in a concrete walled trench. If Christchurch is a swamp New Lynn is a clay pit (one that once that provided half the pottery and plates in New Zealand via Crown Lynn Potteries) unfortunately a very soggy clay pit where the rail was cut down requiring an additional $20 million (to the original $120 million) from the Transport Agency NZ  to cover the cost of the specialised concrete "diaphragm walls" constructed.


To cap off a wonderful fortnight in the growth of New Zealand's infrastructure NZ Transport Agency made it clear they would not finance the $21 million added cost of building Christchurch's new Bus Exchange underground to ensure free flow of buses entering and exiting the exchange without having to fight traffic or inter-mingle with pedestrians. Given the shape, population size and density of Christchurch the new Bus Exchange will be "Christchurch's Britomart" - the premier public transport interchange that will in many ways define the city and provide its most metropolitan core. The Christchurch City Council instead has decided to borrow the money and pay it back over 30 years, which seems sensible given the benefits such an exchange will deliver over decades.  Despite some criticism from other quarters,  The Press Editorial this morning lead with emphatic support for the Council - the editorial headline said it perfectly - "Do it Right".


Auckland has now received, or in process of receiving $1.8 billion in commuter rail and busway funding from Governments since 2001, and Wellington something like half a billion of taxpayers money towards general rail upgrades (with commuter trains a high rail user in that area).  This includes spending more money ($92 million) to extend, double track and electrify commuter rail services from Paraparaumu to Waikanae, serving a population of  38,000 than the $45 million the Transport Agency NZ proposes to allocate to the Christchurch Bus Exchange serving a population catchment of over 400,000.

Widening of the rail corridor in readiness for new tracks and overhead catenary structures north of Paraparaumu, Te Ika a Maui
Christchurch I believe paid for its own first bus exchange, and has not to my knowledge ever received any significant infrastructure funding for public transport other than money towards bus lanes - funding now significantly cut back by the National Government! What are we paying taxes for ? In a very loose arithmetic  (I know it is not quite so simple) Canterbury has contributed 13% of the $2.3 billion spent up north on public transport ...I make that about $300 million and what have we got to show for it?  National is basically saying to Canterbury "on yer bike" .,.oops wrong again wabbit - National Government  funding for Canterbury bike lanes has been cut by a staggering 80%. So hop it!!


What is so bizarre is that world oil producers, energy agencies, make it quite clear that rising oil prices are inevitable and on the way with major impact likely on the world. The National Government seems to be still travelling in the mid 20th century, like some bizarre retro family in one of those idealised 1950s USA car ads, on the a motorway to nowhere. Perhaps the most ludicrous statement of late comes from the Minister of Transport, Steven Joyce. According to Joyce (quoted in The Press March 11 2010) said the Government invested considerable sums in public transport, as well as roading, " but we do believe strongly that people are not likely to sacrifice their personal mobility to the extent some would have us believe". Joyce is talking about choice, he obviously does not understand without a strong public transport sector there will be no choice. Once fuel starts getting above $3 a litre, food costs and most other costs will rise dramatically and wasting many dollars worth of expensive fuel to travel to work, or to needlessly ferry kids and teenagers, as is common now will essentially cut funds for recreational use of motor vehicles.
Posted by David at Monday, March 22, 2010