Christchurchurch, New Zealand, up to now mainly famous for being home to "NZ in Tranzit" blog (YR) was hit by a fair whack of an earthquake at 4.35am on Saturday 4th September. Here are a few pics taken by blogster wabbit - amazed to be alive after emerging with others from a violently shaken 150 year old two storey brick house -  on a beautiful spring morning, strolling around his home suburbs (along with several hundred others!)  about 6 hours after the 7.1 richter scale earthquake. Astonishingly nobody was killed though several score (mainly older) buildings around the city were severely damaged and so far (a week later) 2360 houses have been condemned. As so many people have commented it is "surreal" - in a modern city buildings lie devastated beside the many others showing no damage at all.
NOTE; the city of Christchurch was hit by an extremely violent and severe shallow 6.3 richter scale aftershock which caused massive destruction, took  182 lives and caused widespread injury on February 22nd 2011. This report here dates from before and refers only to the original 7.1 earthquake, five months before.
February Quake is briefly described with links, further below 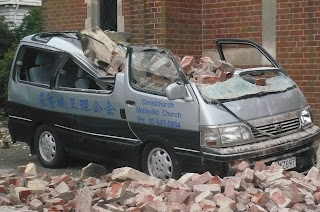 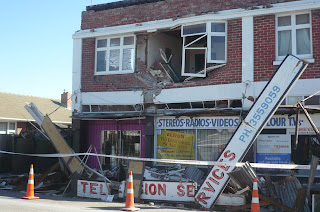 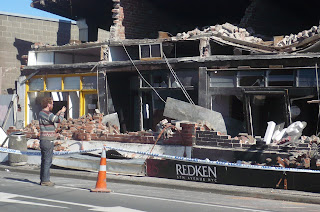 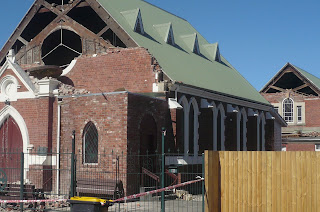 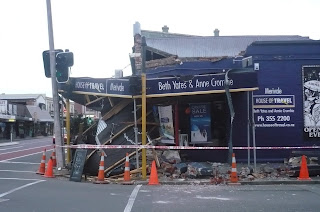 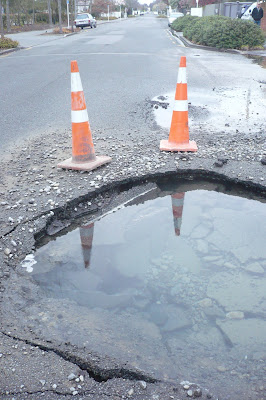 "Lake Aikmans" one of over 200 ruptures of drains and sewer pipes around the city
MORE PHOTOS - taken around the edge of the CBD and other city areas a few days later than those above, and following repeated aftershocks some of which increased damage and cracking of unstable buildings. 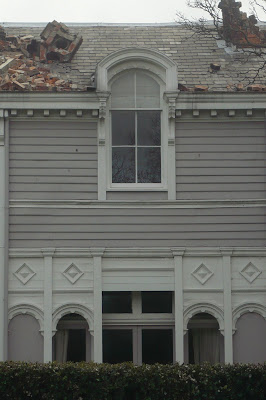 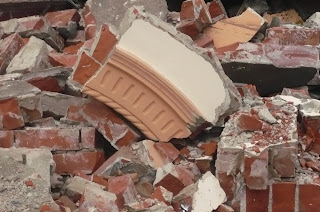 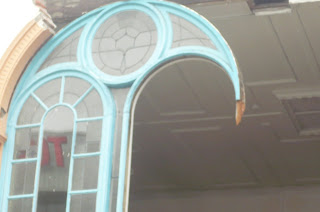 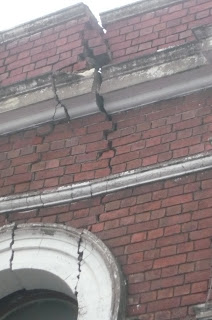 Most of the severely damaged commercial buildings were brick and pre-WWII, if not much older as in this case - and the one below - both north of Kilmore St on Colombo St. 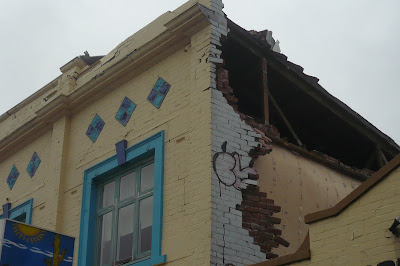 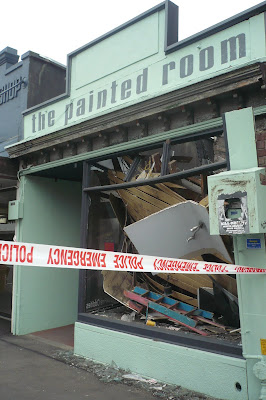 Split ground are common in some places only, below at Halswell 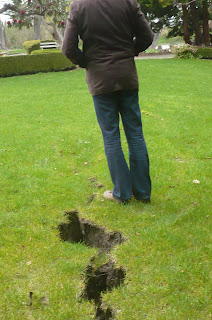 The clean up has begun including the call to evaluate rebuilding older buildings of heritage nature. Below the corner of Sandyford St and Colombo St south. 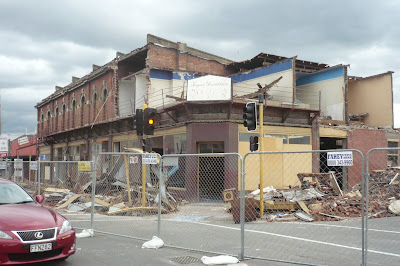 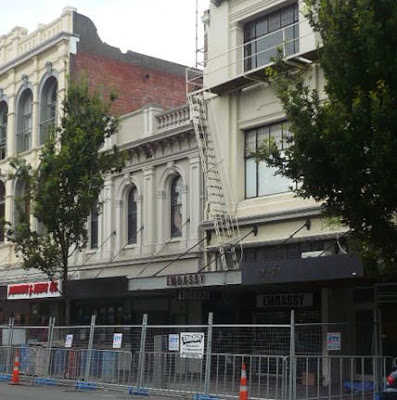 With tens of thousands of buildings effected it is expected to take about three years to complete assessments, payments of the Earthquake commision and insurance payments, obtain professional design and strengthening plans and repair or rebuild buildings damaged in earthuake. This photo of a High Street shop fenced off in December...might look ok but see next photo for close up! 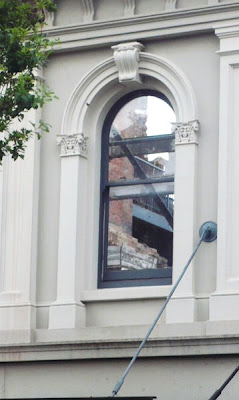 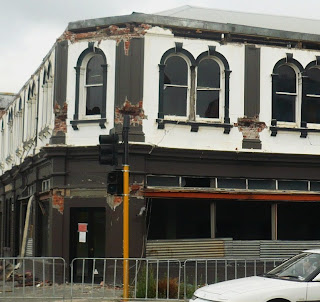 Typical damage to older buildings, even when whole sections do not collapse includes loss of parapet, strings of bricks carrying roof overhang and random chunks missing - former Country Road shop (Manchester and St Asaph Streets). A former hotel further down Manchester appears to have lost significantly more of its parapet as a result of the very violent (though luckily short) aftershock of 4.9 magnitude on Boxing Day (26th December) morning 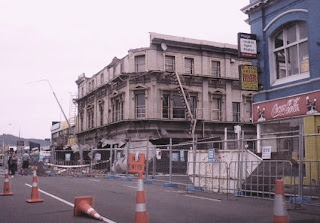 All photos by David Welch;
Other links Wikipedia.  Pattern of earthquake and aftershocks

This report (from the Christchurch blog "Arts, Life, TV, Etc (Moments of collision between the high-minded and the low-brow)"... by blogstar Cheryl Bernstein ...captures the moment and days of aftermath.


February 22 Earthquake
February 22nd Earthquake - although smaller in total energy released than the September 4 Earthquake an 6.3 aftershock on an adjacent, previously unknown fautline, caused extremely violent shaking on February 22nd. It is believe shock waves pinged of the harder mass of a  fomer volcano and travelled immediately and at high speed through the eastern sunurbs and inner city. This collapsed or catastrophically damaged most of the city's older masonary buildings and two high rises built in the 1960s - early 1970s  collapsed completely with major loss of life. The earthquake was so severe that despite relatively tough earthquake resistance building standards in NZ a significant proportion of modern concrete, high rise buildings have been too damaged to economically repair and are being demolished. As this event is well covered by newsmedia elsewhere and easily searchable I include only a few token photos, and links. Since the first major earthquake in September 2010 the city has experienced over 8000 aftershocks, about half significant enough to cause momentary alarm and generate tension and anxiety in many people, several of these aftershocks big enough to cause more rounds of damage.
Here is a YouTube taken in the first  hour or so after the February earthquake
And another You Tube here covering a different section of the city, crowds exiting past the collapsed CCTV building (only the lift shaft standing) in which 102 died, including local TV personnel and many foreign students at an ESOL college

One of the city's Heritage Trams stopped by the earthquake in the city centre, Cathedral Square