Oil Production Plateau - is this the top of the bell curve? 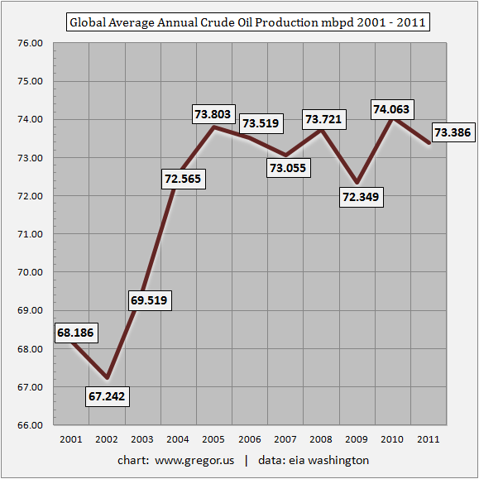 From the International Energy Agency

Oil relies upon pressure to get it out of the ground. Everyone is familiar with the iconic photos of gushers, new oil wells that have broken through into an underground pool shooting oil many metres into the air. Oilmen look for such underground pools, formed over millions of years, on harder impervious rock but once this is used up, the rest of the oil takes years to ooze out of the surrounding rocks, like a sponge slowly dripping into the basin. Sometimes steam can be pumped down into the area helping to push the oil out; other times rocks full of oil, if close enough to the surface, can be crushed (using a huge amount of electric energy) and oil extracted that way. Both systems are slow and expensive. As is drilling into the seabed. Not cheap oil as in the past.

The reason why world oil production has probably plateaued (as predicted back in the 1950s)  and will eventually start to decline (as was also predicted back in the 1950s) has very little to do with "greedy Arab states" or aggressive oil companies - it is the natural reality that once all the easy to access and pump stuff is used, the rest will be so very much harder and more expensive and so much slower to extract. Drip feed for a world where demand for oil rises every year; drip feed for all the rich nations who are taught to believe easy oil is some God given right. not a finite commodity that we are throwing away on a million meaningless trips to the local dairy or commuting to work in traffic jams (beside part filled buses).  All at the expense of our grand-kids.