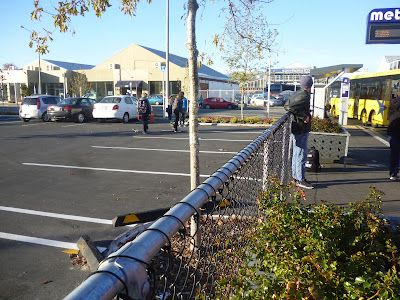 These two photos were taken on different days but as I was catching the same timed transfer they are essentially a pair - above about 8.22a.m. or close. Photo above; several buses have just removed a large crowd of transfer commuters (including kids heading to various schools); photo below about five minutes before the time of the above photo the same area with passengers crowding in, people being jostled, stepping on bus lane to get past each other etc. See how the fence creates a sort of divide - a miniature Berlin wall - limited space for thousands of bus passengers - maximises parking space for five extra cars  (driven by the superior race!).

Why in an area of heavy vehicle movements mingling with pedestrians are the platform widths so utterly budget??  It must almost be a health and safety issue!

Let us please remember bus services are recovering - bloody quickly it seems, even with a central city employment hub that barely exists  - and within a year it is likely the number of passengers using this tiny area will increase significantly. Let us remember there is a world-wide return to public transport in a big way,  including New Zealand (even here, in cities as small as Rotorua and New Plymouth) and this trend is likely to accelerate as oil continues to rise, adding to the recovery pattern in Christchurch a further boosting of patrons. And that adding 26,000 newcomer construction workers will also boost patronage, not least coming into the central city and trying to get out the door of a bus into a jammed platform. Let us remember that Christchurch can be bloody cold in winter - icy, hail, sleet, even snow occasionally - and that not only do the enclosed areas at the Central Station not have a very great capacity but also the "A Stop" in photo here, serving eastern bus routes, is a long way from the covered shelter if you have to push through a crowd or can't get to the front for your bus, The buses often linger for less than 30 seconds at central stops. If you are not there, visible to driver, off he or she goes immediately!

But BLOODY GOOD ON YA MATE. In Christchurch the council is right there on the ball every time!
Note that about twice the area devoted to the bus waiting zone, where up to 80-100 passengers might be expected to queue at any given peak time moment once buses fully resume, is devoted to the 5 adjoining car parks. In Christchurch the motorist is God - even in a city with almost more parking spaces now than cars (thanks to earthquake clearances) - spending on public transport must take second place to the needs of the motorist. 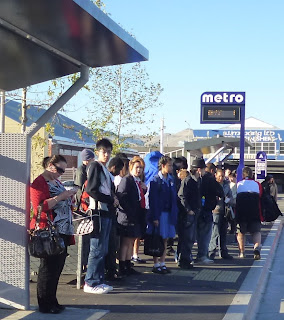