Postcard from the Past - Cathedral Square c1969 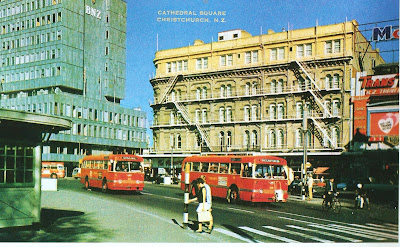 This is "the Christchurch" that so many older people will remember best from the 1960s and 1970s  - cars, buses, cyclists, running right around the Square (and yes, even back then at nights, boy racers in modest amounts looping the loop - but not too much, being obvious prey for traffic cops). The United Services Hotel - background - had a cosmopolitan ambience that gave old fashion strength to the Square as a public place. Even the fire escapes in some curious way work with the design. With its huge limestone blocks (and a bit of strengthening) would it have weathered the recent Earthquake? The Catholic Cathedral of the Blessed Sacrament of similar material and also strengthened is damaged but repairable. The removal of this landmark building about two decades ago did much to kill the Square as the "heart" of the city, the building that replaced it is not unattractive but completely lacking in the necessary presence for such a role. The BNZ has had a makeover since, with a curved soft green glass feature added, down the wall facing the viewer in this postcard,  and looks more attractive in her middle years than she did here, a fairly boring 60s building.
see also - Item 3 "The end of the Empire" - recently added to "ChiCha a little history"
Posted by David Welch at Monday, September 20, 2010