Wabbit doesn't normally do "news" (his last newshound scoop, news from 1962 was a tad past use-by-date) but loping home this afternoon he found a quiet suburban street blocked by army and police ....Christchurch gets more bizarre by the moment !!.....because a huge geyser had erupted.

But rest assured dear local readers,  not a reawakening of the Lyttelton volcano (last eruption 5 million years ago or was it 12 million) - nope just a major water main playing havoc  - and I'll play newsboy [NZ "in-joke"]. No doubt the pipe has been stressed by the repeated earthquakes [a good kid's story -  "The big water pipe who couldn't" - "I just can't take anymore, I can't, I can't!!" gurgled the large concrete pipe "There. there dear you've wet yourself" said mummy earth, "And you've pissed all over me, you bloody little brat" she said throwing a large earthquake in disgust] .

The pipe burst into outer space throwing blocks of tarseal everywhere and flooding poor old Abberly Crescent . Obviously the army and police need to be called (if only because they are getting very bored guarding piles of bricks that used to be buildings) and this added immensely to the occasion.

Small stuff really but as I have readers in Latvia and Poland I feel absolutely honour bound that I must be get this world shattering news onto world circuits before anyone else does ......hey bro and sis democrats don't you just love the way modern technology is upping the quantity, quality and independence of news from all sources?  Imagine all the "what-a dick-head-you-are-youtubes" of Adolf Hitler that might have circulated, him been putting his hand across his crotch, as he often did in photos,if youtubes were around in 1926?  [apparently this posture is a subconscious fear of wolves ripping out one's genitals!].
Anyway here are the pics from earthquake battered Christchurch only 40 minutes ago; you read it first on NZ in Tranzit !! (oops forgot to mention all Metrostar buses are being detoured around same great sinkhole - I knew there was some public transport connection) 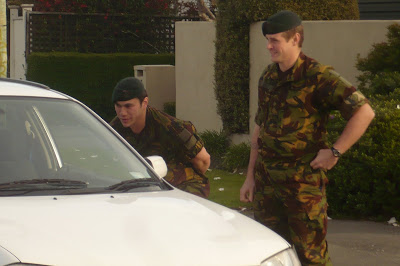 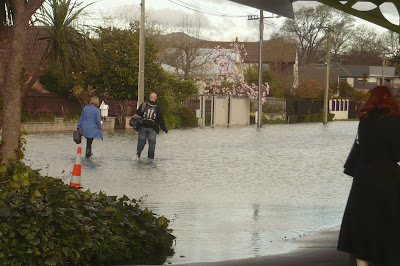 "Are you sure this is the way to the blind instititute?"
Posted by David Welch at Friday, September 17, 2010