Christchurch getting back on feet - and wheels 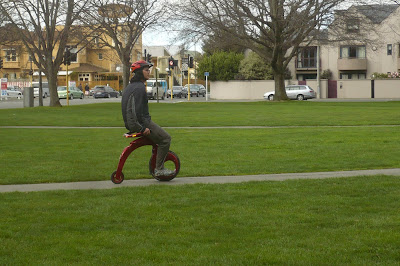 Christchurch (and NZ in Tranzit)  are very much on the move again. Although the possibility of strong after-shocks remains, the city of Christchurch is now getting extended periods between felt earthquakes. The old wabbit pokes his head out of his burrow but feels it a bit churlish to be rushing into critiques of this or that bus system for a day or two, so he's just saying hello to one and all.
The photo above,  a dinky little bicycle (well it does have two wheels) presumably powered by electricity he spotted zooting across Latimer Square the other day. I've never seen one before - does anyone know anything about this machine??
For those curious about the earthquake I enclose a few photos as a "Page" (see side bar). As the central city was cordoned off these do not show most of the larger buildings that came down in the earthquake, but does have a link to wikipedia and a very, very graphic earthquake and aftershock map.
The photo below shows part of the long queue of detoured buses heading down Durham Street (the Bus Exchange still off limits) on the first day services were resumed.  I suspect that closed businesses and the complications of moved stops and detoured routes probably made it the lowest earning business day in local public transport history - even in peak hours I never saw more than five passengers on any of the buses I caught. The level of response or need is impossible to predict in such a rare post-disaster scenario and  I for one thank Metro for working quickly to give carless people a chance to get around the city as soon as possible after several days hiatus. 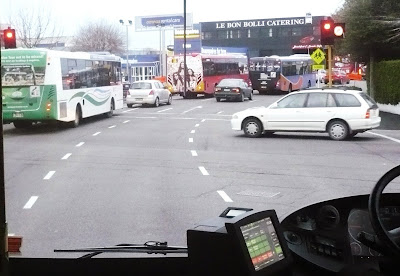