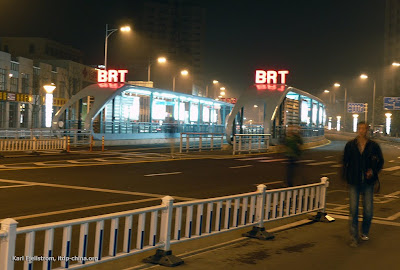 Local politicians and journalists have yet to grasp the concepts of Bus Rapid Transit let alone recognise the way it is transforming public transport around the world BRT station in Changzhou - Photo Karl Fjellstrom ITDP
Back in the early 1960s an older brother brought home a record made by actors Anthony Newly, Peter Sellers and Sophia Loren called "Fool Brittania" with many satirical tracks. It was taking off the events and characters in the Profumo affair.  (Historical note; At the height of the cold war it was discovered that John Profumo, British secretary of State for War [yeah, right!] had been having a sexual relationship with a beautiful London call girl, Christine Keeler.  She was also sexually involved with a senior Naval attache at the Soviet legation, Eugeny Ivanov, with all the implications of spying, compromised politicians etc.)

Deliciously, this recording about the Profumo affair (with a few pokes at the Royal Family) been banned on the  NZ radio network [the only network in that era - government owned] which made the jokes seem twice as funny. Big chunks of dialogue from various skits have stayed with me across the years. In one of those satirical skits the British Conservative Prime Minister, Sir Harold MacMillan who was getting pretty old and doddery by that time, gets up in the British Parliament and makes a speech, defending the government and the British secret service.
"In this country today " he quavers "we have one of the finest secret services in the world," MacMillan pauses "Unfortunately it belongs to the Russians."


The cadence of this joke has resonated in my head over and over for the last five years as I watched massive spending up North offset by the Canterbury crowds jubiliantly waving damp bus tickets in Christchurch.

The echo in my head goes something like this - "In Canterbury today taxpayers are financing the greatest investment in public transport since the Christchurch tramway system was built. Unfortunately the railways and busways we finance are being built in Auckland and Wellington".


Actually as will be obvious from much of what I rabbit on about I don't see much viable role for rail transport in our fine but small city which is with-out a rail useful footprint. I'd rather see the money be put into busways and associated cycleway networks, the judicious buying of certain properties and the green boulevarde building between secondary access roads, underpasses, proper busway stations etc. Bus Rapid Transit is one of the fastest growing transport technologies in the world, but one that the Mayoral candidate's in Saturday's paper (and The Press journalist himself) barely had the slightest clue about - rambling on about bus lanes and even more bizarrely putting light rail in on-street lanes!!

The essential jump in thinking that no politician has learnt to make - think rail -  build bus". Whole chunks of railway infrastructure cost more than our proposed bus exchange - think rail - build bus. Give buses the status and clear run advantages, the separated corridors, the island protected lanes, the platformed stations and the underpasses and overpasses, the levels of investment (even just one third the investment) that rail gets and watch those buses go - not every 30 minutes like a train but every 5 minutes. And no silly needless transfers, rather door to door, cruising the rapid access corridors non-stop between city and suburbs.  Put the bus station underground and build a class busway network!

Oh well,  we can all join Bob in watching this movie and see "our trains" from a far; if the trains cost $308 I reckon that means Canterbury tax payers (13% of NZ population) coughed up about $40 million (add about anoter $6 million for another recent Canterbury gift - our share of the permanent bus lanes on the new Mangere Bridge!). We could've put a bus underpass under the motorway and another under the railway yards for about half that amount!
Posted by David Welch at Tuesday, August 03, 2010