"Given the context of it you can't help but think there is a bit of a threat contained within it."
- Brent Efford "Morning Report" 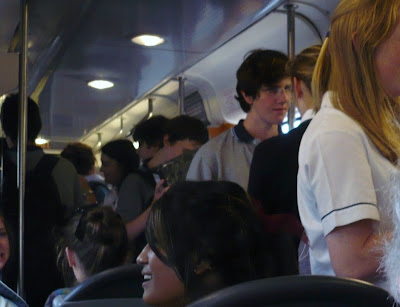 School's out 3pm!! Auckland's western commuter rail service gets swamped with high school kids at station after station, travel cost about $15 per child per week. National wants the parents and ratepayers in cities to pay more for their children's public transport whilst gifting country parents $1700 per year per child in school transport -  no parent contribution expected!
The National Government is making scant attempt to disguise the fact that it intends to rule in favour of its own sectional interest groups and supporters. A recent piece of over-ripe hypocrisy is the decision to charge country school kids no fares whatsoever for catching buses to school, whilst expecting thousands of city children's parents to pay for their kids to travel to school. An education department report - presumably originally ordered by the Labour Government - noted the injustice of thousands of city parents paying for school bus fares for their children (including contracted services) while country parents made absolutely no contribution. It was brushed aside by National's Minister of Education Anne Tolley in September last year**. The current cost per year of transporting 81,000 country school children is huge, $141 million, and is expected to rise to $159 million by 2012. It beggars belief that a government theoretically claiming to be managing New Zealand better, sees no no need for parents of these children to make at least some token contribution towards these costs. The typical fare paid by children busing or catching trains to high schools from areas which have no high school (many more bus or train by choice to religious or specialised schools) averages around $2.50-$3.00 return cost per day, or $12.50-$15.00 a week in school term.
Nobody would expect country children to pay ro-rata for the extra kilometres they have to travel, but surely some standard rate boarding fee for school buses buses should apply in the country as in the city? Or no school fares apply at all, anywhere!
If country parents paid a standard fare comparable to a two section city trip (in Christchurch, basic city wide Zone 1) during the roughly 39  weeks a year of school days this would generate approximately $35 million per year.
We get a much clearer picture of the extent of National Party distortion of the economy to meet their own traditional sectional interests when we realise that this week Minister of Transport Stephen Joyce is bemoaning the Auckland and Wellington commuter rail systems operating at a 20% "shortfall" equivalent to $20 million a year. Joyce himself admits public transport is subsidised all over the world [Blog note; virtually everywhere, apart from London, some major Japanese cities and Hong Kong] costs off set against saving in roading or otherwise impossible gridlock congestion levels, and keeping the elderly, disabled and non-driving age population mobile it is unclear what this strange new transport term "shortfall" means". Joyce is wanting the local regions to foot the bill, ignoring 170 years of New Zealand history - that we are far too small in population for any major infrastructure system not to require significant input at Government level. All transport including roading in New Zealand is heavily subsidised from general taxes.

As Brent Efford of  Wellington rail advocacy group Transaction told Radio New Zealand's "Morning Report" in response to Joyce's sounding off  "Given the context of it you can't help but think there is a bit of a threat contained within it." Auckland and Wellington rail carry 8 million and 11 million passengers per year, so a subsidy of approximately a dollar per passenger trip towards operating costs seems an unusually low amount for a government to be making. Given many of the new rail and light rail systems established in other countries often cost taxpayers as much as $15 per each passenger boarding one wonders where Joyce is coming from.
Well some might wonder, others have a fair idea!
**Source; Tolley rejected school bus cut; HOW THE COST WILL RISE
BEAUMONT Nathan. Dominion Post. Wellington, New Zealand: Sep 16, 2009. pg. A.3
Posted by David at Friday, April 23, 2010