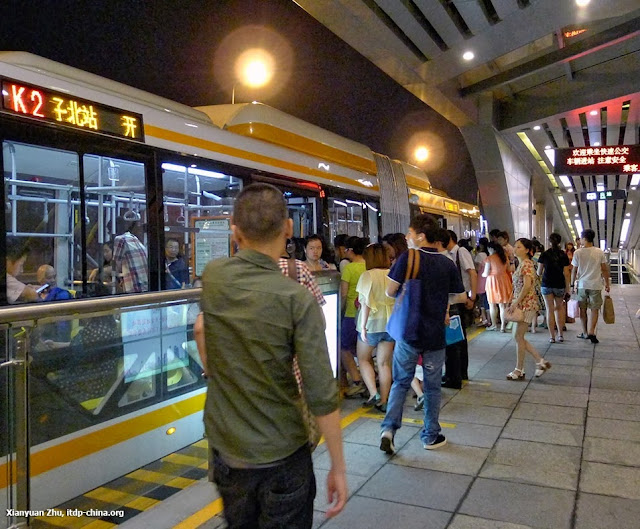 Photo thanks to Institute for Transport and Development Policy

A bus rapid transit station in Chengdu, China. Modern bus technology if used well can deliver most the benefits of rail or light rail at a fraction of the cost, lower operating costs, greater frequency and more diverse spread of services.

A few years ago, watching TV I saw a a high ranking Chinese politician being interviewed (I think he was an associate minister of finance or something similar) on a BBC business programme. In response to a comment by the interviewer he said (i.e.to the best of my memory), "Oh no China is not trying to catch up with the western world, we are trying to jump ahead of it. We aim to try to learn from western mistakes and not repeat them."

China has many thousands of bus systems* and scores of commuter rail systems, a few underground metro systems but only a handful of light rail projects are planned. And indeed  these few appear to be less about glamour trams and more about lightweight gravel bed trains. By contrast where a rail corridor is not seen as appropriate, bus rapid transit systems, often of the most sophisticated kind and with substantial infrastructure, have been implemented.

Chengdu with a metropolitan area population of 14 million has a full range of transport options the most recent a bus rapid transit system on a central suburbs orbital route, built on an elevated bus-only roadway. This busway opened this year and is expected to carry 300,000 passengers per day (clearly one doesn't have to have a rail based system to handle heavy loading if the right infrastructure and technology is applied).
While Christchurch doesn't need elevated bus roadways, applying the principles of rail to buses  - a clear passage with minimum intrusion from shared and conflicting traffic and other modes - can lift main corridor bus services out of last century into what is virtually a whole new mode of transport, as the bus station in the photo above makes clearly evident.

As the term "bus rapid transit" is a somewhat loose one - now often used by cities that do little more than build partial on-street bus lanes, the Institute for Transport and Development Policy - the leading international body promoting bus rapid transit - has introduced grading standards.

These allows bus companies and operating authorities (and the general public) to measure what sort of commitment is being made to create best practice public transport systems.