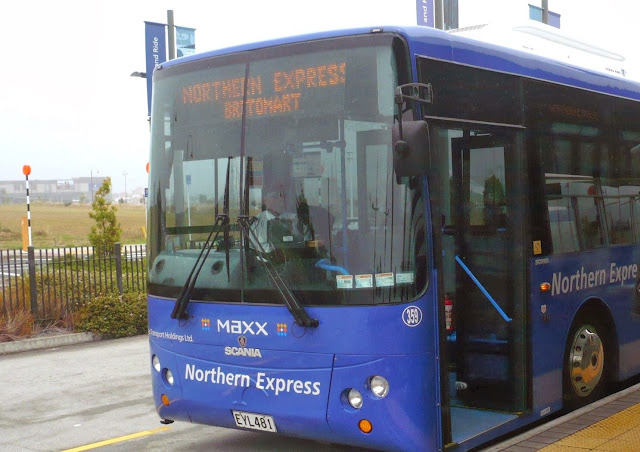 This is a quality bus station, at Albany on the Northern Busway in Auckland.  The then city Council for the area - North Shore City (now amalgamated with Auckland City), governing a population only three quarters the size of Christchurch (290,000) paid $84 million dollars for fours such bus stations. This investment in busways has seen spectacular growth of patronage on the Northern busway which has virtually doubled ridership expectations, in the five years since completion achieving 2.3 million passenger trips per year. This is even more than Christchurch's highly successful Orbiter was carrying before the quake  A $550 million extension of this busway- mainly taxpayer funded - supported by NZTA is expected to begin construction in the next two years. 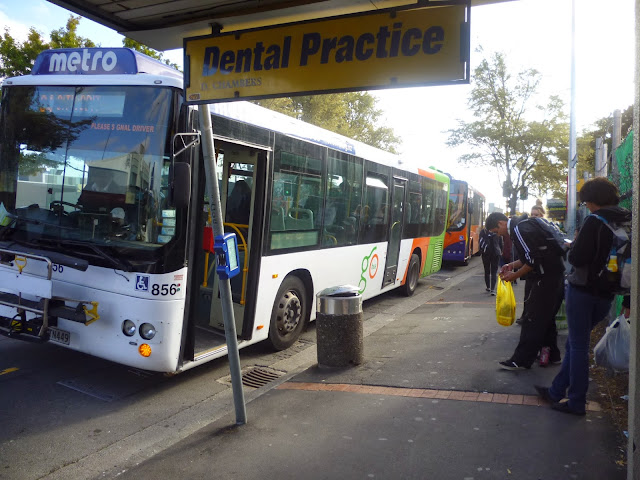 This is the current situation in Riccarton, Christchurch, in-stops (city bound). Both sides of Riccarton Road have a considerable camber, and it is not uncommon for elderly people (in particular) to find entering a bus with a sloping floor somewhat hair-raising, and for people of all ages to occasional stumble backwards.
This is not a quality bus service, and the Christchurch City Council it appears will have considerable logistic engineering problems, to restructure the roading and footpaths to achieve safe, comfortable and attractive entry to buses, and also meet existing shop doorway entry levels.

It is amazing indeed that OSH can consider such a steep tilted accessway, used by jostling crowds of all ages, and vulnerable people with age or physical disabilities or carrying shopping, or pregnant etc as acceptable. And has the Council scoped this work and calculated the real cost in remedying this situation, the time and disruption and loss of business to Riccarton Road shopkeepers?

It need hardly be said where buses run on lanes along steeply cambered roads, in gutter-side bus lanes as they do at some points in the current bus system, the sensation of falling off one's seat in to the aisle, or onto the stranger sitting beside one is not considered quality bus travel by most people.

NZ in Tranzit sees a better way to create quality public transport corridors - by adopting overseas best practice strategies. In these cases falling back on bus priority and on-street lanes is done only when other more effective choices are not available. Preference should be given to creating entirely segregated "bus arterials" where road space is predominantly devoted to - separate - physically segregated bus lanes and off-road cycle lanes .

To recognise their equal status with the grossly over valued automobile NZ in Tranzit calls these "Green Roads" .  On such roads camber would be minimal and the mini bus stations (rather than stops) have door level loading.

There is ample opportunity - at least currently, perhaps not tomorrow - to build such a segregated busway corridor through "central" Riccarton - with a very sophisticated bus interchange in Maxwell Street - and to do so for less than the cost of two of the bus stations built by North Shore City.

But it all depends upon a city leadership able to build public transport infrastructure at an appropriate level for a city the size and wealth of Christchurch with in the New Zealand context.

NZ in Tranzit believes the $6 million Government funding allocated for our premier Western Transport Corridor is absurd, trivial, debased, an insult - measured against hundreds of millions given to Auckland and Wellington, not least the better part of $170 million given for Wellington's Matangi trains only months ago.

Transport Minister Gerry Brownlee and the National Government are milking Canterbury fuel taxes for hundreds of millions to send to Auckland and Wellington, while Gerry keeps his foot tightly placed on the jugular and airways of Christchurch city.

This is blocking the realistic funding base for a proper rapid transit system - rail and/or busway corridors.

Even before the earthquake the central city was strangulating under congestion - easier to shop at a suburban mall etc Only mostly segregated public transport corridors that deliver thousands of people quickly and easily right into the heart of city, even those from the outermost suburbs, can really create a vital alive city. Bus lanes are mostly elastoplast, not many will get out of bed for a two or three minute faster bus ride, but attractive modern busways build cities.