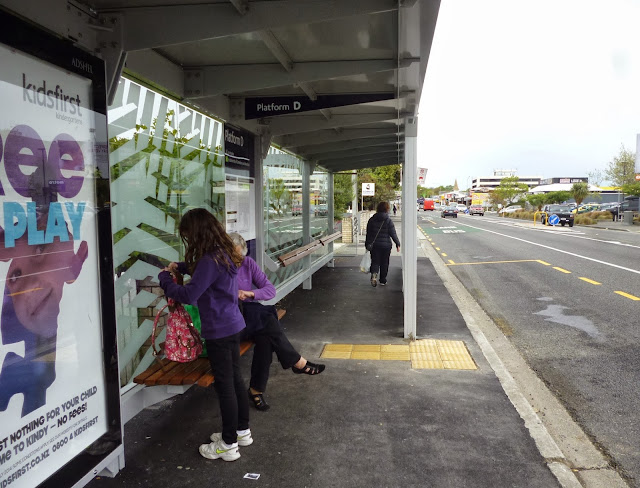 East side of road

I am impressed with the new bus mall or transfer station [not sure of exact description] at Northlands Shopping Mall. It is about five years behind when it should've been built; it is pretty basic in facilities but is it is also only intended to be temporary (OK, OK, I just can't resist humour in this blog).

Light rail advocates often talk about the way the permanent infrastructure of rail lines embedded in the ground etc give light rail a greater appeal and status, and attract business away from other areas towards the vicinity of the line. Certainly these simple but solid shelters immediately lift the public profile and status of bus use in Christchurch, give a more metropolitan air to the suburbs. The "super bus stops"  might be nothing fantastic in themselves but do draw a new line in the sand, so long needed in Christchurch. 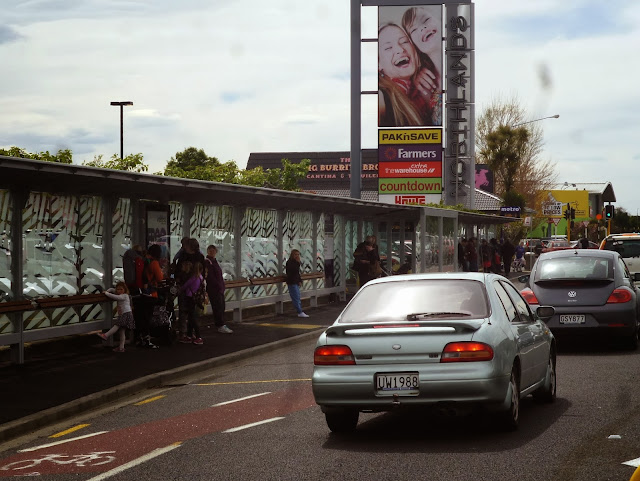 West side of the road

Sure they are not perfect, The shelters have no immediate toilets but the Mall and Supermarket stay open long hours, and if the wait is too long [and every stop has real time signage indicating when the next buses are due] then there is also time enough at least for the able bodied to get to those toilets and back.

As with The Central Bus Station the bus stops are organised into Platforms A, B,C, D, two each side of the road, various routes departing each stop with bus pull out spacing between each stop. There is however no passing lane for buses to pass each other, so all must regain the main traffic stream, albeit in Christchurch there are usually a few good hearted motorists in any queue that will slow to let the bus merge back into traffic.

It was a bit of cool nor-east wind the day that I took these photos - the prevailing "sunny day but chill" wind in Christchurch  - but these shelters seem to block or to offer a lee wall in front of which hanging about was mild and pleasant enough. The other chilly wind comes from the immediate opposing direction - southwest - it is the wintry storm wind, bringing rain, hail even snow etc. It will be interesting to know whether the same buffering effect works the other way, though obviously no bus shelter is ever going to be exactly toasty in a sou'wester.

A couple of sections are set back deeper and - if not fully enclosed at least protected by added front and partial side walls of glass, albeit probably intended for the elderly or young mothers and children.  Even allowing for passengers spreading sideways, around each designated stopping point (according to which route the bus is on), there isn't a great deal of room anywhere along the pedestrian area for the complex mix of loud, bouncy teenagers; frail elderly and young mums with toddlers in tow and a baby in the pram, that can soon fill a busy bus stop. Obviously some part of the pathway should offer clear passage, and even people crowding together, in NZ anyway, prefer to maintain a foot or two spacing from total strangers. If these aspects are allowed for, things are far from spacious. 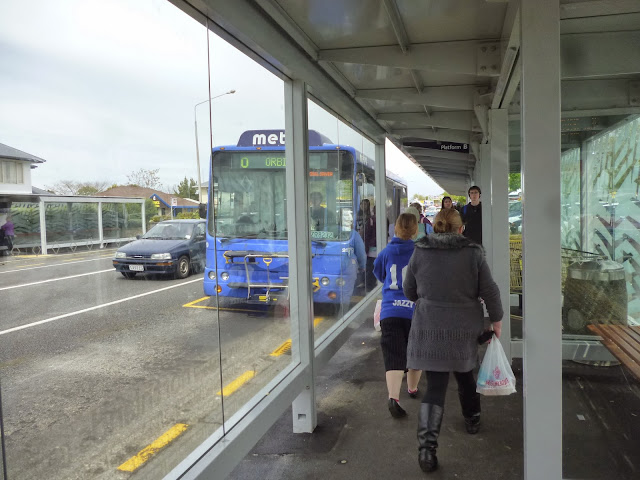 In consequence of the uprights of the bus shelters and/or the space taken by people waiting, and walking the footpath is narrowed and this could be particularly difficult to negotiate when buses are busy loading. This is not a new problem as the NZ in Tranzit photo below of the RedBus loading school kids at the same spot in 2010 shows.

Given the embarrassment caused by the first Bus Exchange not allowing for rapid growth in patronage -  it quickly became far too small -  one would suppose any transfer station (which per se is expected to generate increased waiting passengers) would be designed with room for larger numbers than current.. 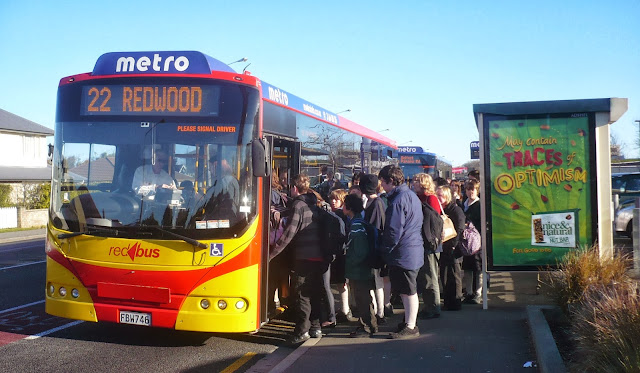 I imagine the Government funding obtained by the council infrastructure people, in line with Government policy of public transport having to reduce congestion,  has had to be spread this amount across several other planned transfer stations.

Even so, it seems a bit stingy that the National Government,  that only 3 months ago committed another $100 million** plus to Wellington Regional Council as a payment towards further Matangi electric trains, could not come to the party with the extra $30,000 or similar it would probably take to buy (or lease for ten years) the ornamental tussock grass box between footpath and mall car-park. This simple gesture would have allowed it to be removed [not rocket science to rebuild later] in order to set the temporary shelters back along a greater length. This would also ensure more seating, more weather protection and of course greater comfort. ease and safety for both passengers and passing pedestrians trying to thread their way through jostling crowds.

Still it is good to see some movement towards better quality public transport infrastructure (I can't moan about everything!). 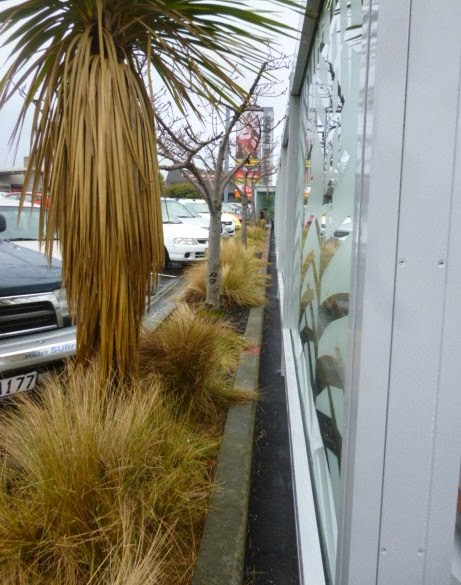 In a city of with growing competition for space  would landscape enhancement
be better achieved by vertical planting on decorative walls and trellises?

"This new deal is possible because of Hyundai-Rotem, who offered us more new trains at a competitive price, and the NZ Transport Agency, who have put in substantial funding".
- Fran Wilde, Chairperson Greater Wellington Regional Council