I often decry the chronic state of public transport and bus services in the USA but there are always exceptions.

RedCoach, a state wide service provider in Florida is amongst those redefining the concept and nature of inter city coach travel. 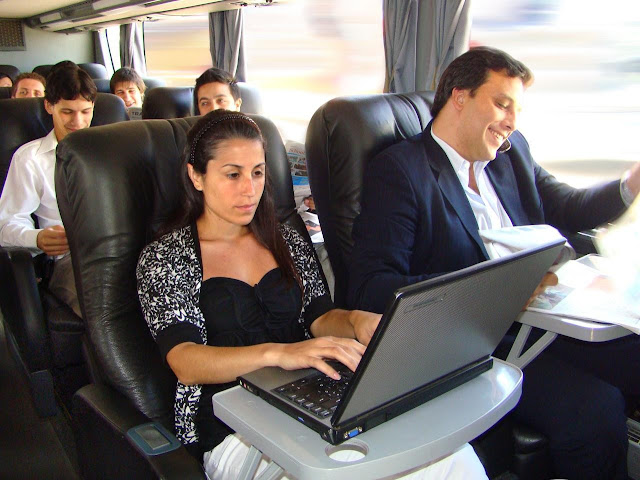 This photo is part of their promo but you can watch a whole You Tube ad here.

Sorry folks; NOT likely to be seen in Canterbury New Zealand, at least not as a regional commuter service.

Regional commuter useful services are  just not on the Ecan books - despite all the fatuous huff and puff stuff about getting people out of cars or addressing longer journeys.

In contrast, NZ in Tranzit believes a bit of commitment, vision and negotiation could put together eight services, spread fairly evenly each day, Timaru to Christchurch and vice versa.  Notably by adding in the specialised Metro services to provide commuter useful morning and early evening work and schools links, provincial access to Christchurch events, appointments and international flights, and potential for return day-trips shopper specials etc for city folk.

XPT* buses (coaches) such as this - with leather seats made from Fonterra's million and one retired dairy cows!! - could add strata and value to public transport.

On the other hand there is another rural option and one we might well see much sooner.


** XPT = Express Premium Transport (mooted by NZ in Tranzit)  - Fares are set to offer subsidised discount fares in rural areas (with ratepayer and taxpayer input) equivalent in spirit to subsidised fares around cities.  These apply in rural areas where buses (coaches) stop as needed at the designated stops.  But as services approach cities, into overlapping metropolitan area services the buses stop only at limited service stops, city bound passengers can board but a higher fare rate applies recognising faster more comfortable service.  For  example a 50-100% added fare cost would apply loading when picking passengers up within metropolitan city areas also served by conventional city buses, such as north of Burnham or South of Woodend in greater Christchurch.  Those passengers  within city boundaries prepared to pay higher fares, for quality and journey speed,  help cross subsidise costs of services to less populated rural areas.

Long term this is seen as way of introducing added strata of public transport, recognising "one size fits all" is never going to shift a population away from cars - every product in the world is marketed in multiple quality and pricing levels (including air travel and many long distance rail systems), let's get real.

As forseen,  payment subsidy per passenger trip/kilometre would apply to higher quality services, probably based on standard service fares, irrespective of the service quality. With XPT services city area passengers (but not rural ones) would be paying about two thirds of the farebox, rather than just 50% - a similar same principle as applies in the case of taxpayer funding of integrated schools.