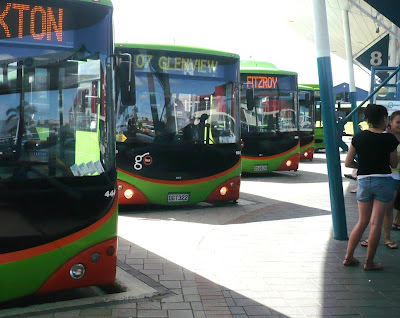 No provincial area seems to be doing public transport with greater commitment than the Waikato. Over the last few years they have levered bus up bus patronage, by several millions, particularly in Hamilton, pop 160,000.

Some years ago taking a leaf from the then successful Christchurch's bus system Environment Waikato introduced their own version of The Orbiter and also a central city circulator. "On Board"

Learnt from Christchurch and elsewhere
Leaving Canterbury behind in its wake Environment Waikato ensured there was provision not only for bus services tofro towns in its immediate metropolitan commuter reach (Te Awamutu, Huntly Raglan etc)  but also took responsibility that at least some level of public transport within - and across - the whole region was provided -  Pukekohe, Morrinsville, Coromandel, Taupo and Tokaroa included.
Likewise Hamilton took all the steps Christchurch had failed to take when Christchurch set up its own Bus Exchange - The Hamilton Transport Centre offers  immediate access to an adjacent cab rank; left luggage lockers; full cafeteria facilities ; and combines regional, nationwide and local bus services in one easy catch hub - including, timetable info on display and ticketing.

Great synergy between cabs and buses in Hamilton!
Environment Waikato continues to offer service improvements, albeit having to work with a Government less sympathetic to funding or promoting public transport.
It is not surprising perhaps that for the second year in a row that a survey of passengers has revealed 98% satisfaction with services.  It is the same sort of satisfying half truth that Environment Canterbury and probably the Christchurch City Council used to glow smugly with - I doubt that they would even dare to undertake such a survey in the current situation!

I support such surveys, indeed have responded a couple of times to being surveyed on a bus in Christchurch. I recognise they can play a valuable role, to a degree.

For example in the Waikato survey;
"The survey results indicate that 53 per cent of passengers are aged under 24 and our largest market segment is tertiary and secondary students at 40 per cent. So it is no surprise, then, that 47 per cent of passengers said they use buses because they have no other choice.''

But they are a half-truth or indeed much less - a 5 or 10% truth. Because they are all about testing the existing customer, the one on the bus...not the one who used the bus three times but found the timing useless, or the one whose custom remains only potential, never using the bus from one year to the next.

Obviously if customers like those in the Waikato are highly satisfied that means other potential customers are more likely to find the service attractive. But doesn't tell us too much in. Without a cross population survey - probably by phone - of the how often do you catch a bus type,  that also links respondents to home and work /study/shopping areas and also places them in age, education, marital status and income brackets, a more precise profile is impossible.

To foster public transport usage it is necessary to know who catches buses and who doesn't and in what areas and for what reasons. Is it public transport image, lack of access to an en route supermarket, failure to depart an industrial area at a useful and accessible time for those working nearby, that rates highest for those over 25 single or between 40-60 married? Thanks to versatility of commuters it is is easy to start seeing patterns if multiple responses are run through multiple filters and service levels, schedule patterns,  support systems, advertising and info can be more precisely targeted.

My experience as bus driver and full-time passenger, 14 years each approximately, is this is an industry that spends tens of millions per year on running services with very little attempt to develop a scientific understanding of what factors predispose bus use or not.

An equal spread of minimum service levels is necessary, but does not prohibit attracting the next most winnable customers as a patronage building strategy.


So yeah, good on ya Waikato for offering a good bus service,  but I believe the public transport industry EVERYWHERE needs to be doing far better research than merely checking satisfaction levels of customers already on the bus.
Posted by David Welch at Saturday, October 08, 2011