It seems almost certain we - the world - have now passed peak oil, the point where it is impossible to extract more oil, or oil faster or cheaper than previously.  Production of oil, it has been predicted, will plateau for an unknown length of time before irreversibly declining and prices escalating rapidly. This plateau seems to be the case now, as shown in the graph below. The head of the world's foremost oil monitoring body, the International Energy Agency, an organisation long considered to be a rosy picture painter of oil's future, has recently stated the peak point seems to have been passed in 2005. 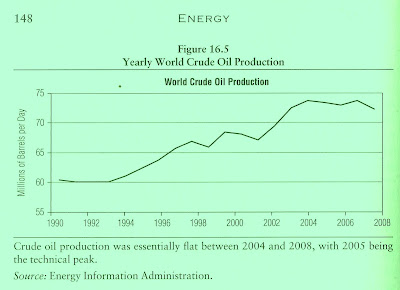 It is probable capitalism will prove as big a failure as communism did, though for very different reasons. Basically it is a system that relies on borrowing to build sufficient growth to make a profit to pay back the loan. When cheap energy cuts out and products get too expensive to make or sell, that loan doesn't get repaid. System collapse.
Although the USA is printing money to fake that it's boat is still afloat, in reality the amounts of money borrowed (publicly and privately) in USA and elsewhere to maintain lifestyles no longer sustainable have now climbed to unprecedented and absurd heights. Inevitably if the boat starts sinking the rich and powerful will use their advantages to dump on the poorer first.
This includes car user addicts who can be expected to try chop back public transport expenditure. It is an easy target in the internal resource wars, but perhaps one of the most ironic. At this plateau stage oil price rises are expected to remain relatively modest, a great time to be building added resilence into the transport system. If one reads US reports on a regular basis (I receive about 20 US transit linked items a day), there is quite the opposite happening, huge moves to "jettison the lifeboats" reduce spending on public transport, (in most of the USA, this was never spectacular anyway).
I include here as a sample,  a link (includes You Tube) to news of the service cuts in the State of Washington. These are  particularly poignant as the North-Western USA has does "transit" better than most US areas. Creating good public transport is bloody difficult in any car-dominated country, it is sad to see such efforts going backwards.
The city of Seattle - metropop 3.4 million - was visited by Christchurch Mayor Bob Parker and two excutives in hope of finding some connection to Christchurch, one eigth Seattle's size.  Tacoma is also home to the only city  in North America below a million residents (metropolitan area) operating a light rail system. This tram system serves Tacoma (290,000) and surrounding Pierce County (approximate another 500,000 residents) and delivers just under a million passenger trips a year. 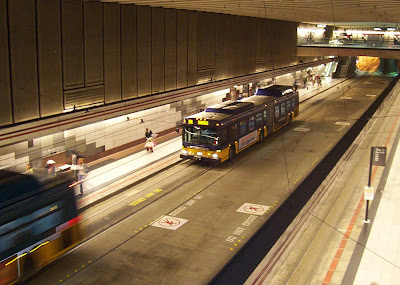