Four reasons why Jim Anderton got it wrong 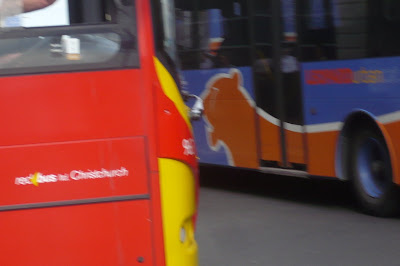 Candidate for Mayor for the left leaning 2021 ticket in the last election was Jim Anderton, long serving Labour/Progressive member of Parliament. The early polls gave him an huge lead over sitting Mayor Bob Parker. However it would not surprise me if everybody over 40 years old, whether for or agin Anderton, thought exactly as I did "Oh yeah? We'll see! A week is a long time in politics!".

Nothing is less certain in politics than a certain win. And so it proved.


Bob the re-Builder** swept to power, if not in a landslide or tidal wave , at least in an upswelling liquidification of resident's gratitude for being there when they needed a figurehead; the profound and needed reassurance of a concerned and committed leader dressed as an orange.

It wasn't just the earthquake, I believe, that put Parker back in power. Anderton and the 2021 team never really did their homework on public transport and failed to develop the cohesive vibrant public transport policy (including cycleways) needed to carry the popular imagination. It was all a bit fluffy, a bit more of this or that, a bit of a tickle up here or there. Aligning himself with Transport Agency NZ (and inherently the National Government) Anderton didn't want money spent on putting the new central bus (transport) exchange underground. Instead he said it should go to suburban exchanges. Perhaps indicative of how little time Anderton or most the other candidates spend using public transport - they seemed to presume this was a fashion statement by Bob Parker, or purely to allow light rail (overhead, at ground level) rather than a vital piece in the jig-saw if public transport is going to become far more competitive with car use.
To offer a sophisticated transit system , move buses into a classy transport option, every bus needs fast and free access into and out of the congested central city area and Bus Exchange; this is probably the most important battleground on which public transport can compete - and beat - private cars if done right. A great psychological advantage, a huge image builder and redefiner of public transport's strength and status in society. As well as so damned practical. Get to work fast; get home fast.

I came through Christchurch at half past five tonight (at 5.30pm on a Thursday) and the whole area around the Bus Exchange was absurdly constipated, buses (and cars) queued in every direction. No buses can get into the Bus Exchange until the buses in front have loaded and pulled away from the loading lanes; these exiting buses in turn need to fight their way out through pedestrians and the Lichfield Street traffic and sometimes incoming buses [who will usually give way but may be already too far across the path of the outgoing bus to get out of the way]. This in turned blocked Lichfield St west of Colombo St as far back as the eye could see ; and Colombo St south of Lichfield ditto. The whole area was barely moving, a few vehicles at a time only.
Below I use my camera to offer four reasons why Jim Anderton and 2021 were wrong - shortsighted - to oppose the idea of putting the bus exchange underground, a move which will give buses much needed no wait/no wasted time direct fast access and egress to and from the Bus Exchange and potentially the whole central city area.

(Reason one ) Buses trying to exit the current Bus Exchange are held up by pedestrians, cars and other buses

(Reason two ) ...as a consequence incoming buses can't get into the Exchange 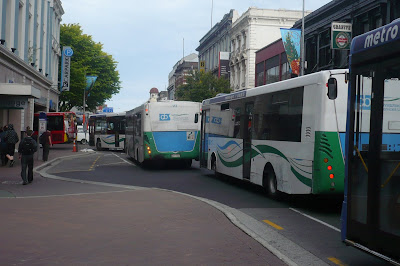 (Reason Three) ...buses heading into the Bus Exchange from the west bank up (and block cars) west of Colombo Street on Lichfield, all the way back towards the Avon

(Reason four) ..buses coming up Colombo Street to turn right into Lichfield Street and the Bus Exchange can not do so easily, if no gap in the bus queue offers itself; this in turn this causes queing and banking up of buses and cars souhwards along Colombo Street.

All these photos were taken more or less continuously - within less than minute or two of each other.


Lacking quick access tofro the Bus Exchange bogs up All traffic across several city streets!! Without their own exit and egress tunnels and lanes buses (over 300 per hour eventually) will have to stop; wait; queue. Get real

Let's build transit for 21st century reality - when buses offer the best quality, best value and fastest way to travel within a city.

** Bob the re-Builder. Thanks to who ever coined that name; if proves true it could be an honour, the very basis of his legendary appearance, decades hence, as a 92 years old on "This is Your Life" !