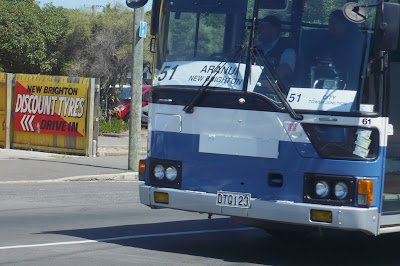 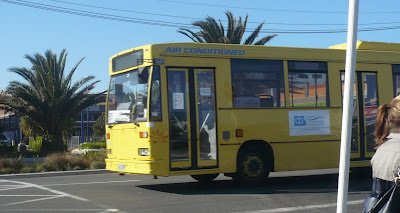 Bananarama !
Metro credibility is taking a hammering on the eastern routes. Like so many other aspects of life in Christchurch supply of buses has been hit by the earthquake.
In the eastern suburb some fairly historic buses most of which have probably not done timetable work for decades have bubbled out of the ground!
This unfashionable parade of mish-mash liveries is apparently the result of simultaneous diasters in opposite hemispheres of the globes. Flooding in China has interrupted production of Zhong Tong buses for supply to Christchurch Bus Services; an earthquake in New Zealand - a collapsed wall in the at Designline's bus factory in Rolleston - has interrupted production of 23 buses for Leopard. All very much act of God stuff and getting by as best can do.
Underlying this, judging by recent comments,is a deeper bewilderment amongst many eastside people that just when Eastern residents were starting to benefit from the latest high quality new Designline buses recently introduced on many routes by Redbus, suddenly Redbus is drastically dumped at the tender round. I was even approached by an agitated gentleman wanting to sign some mysterious petition he said a woman was running for restoration of the quality Redbus service - I told him I hadn't heard of it but doubted a petition would reverse a legal contract.
It seems a crazy system that companies are expected to operate with such big flip-flops in the number of routes and buses and workers needed, shifting and changing from one tender round to the next. It can't be much fun for drivers, even if jobs (and the same routes they are used to) are now available at a different bus company. And how any business can operate on this basis I don't know.
The credibilty of Metro is impacted, which only adds to the very mediocre results of the last route change review for eastern routes which did so little to improve bus services on the east. It was clear from this route review (which also saw some extraordinary flip flops) that despite taking a considerable chunk of the funds raised by regional rates to operate ECan, Metro itself has no underlying strategy, analytical tools or measured and monitored criteria to improve city routes and services. Into the vacuum of poor planning and lack of systematic criteria, the lack of "intention" came a mish-mash of changes but very few real improvements. This included no real service at all to several large enclaves (Aranui south of Pages Road, Tumara Park, Woodham Road-Avonside Drive), a 50% reduction in services to the city from residential areas in Burwood Road and Lake Terrace Road; the running of 60 Parklands route as a quasi express across 3 km of open country, largely pointless given the routes one-side of the road minimal catchment base in the eastern areas. (an express service but expressly for whom?). The Alpine View enclave got a sort of service, albeit an unattractively long six minute extra deviation through Emmet Street on the way to the city! Burwood 83 route which could do so much to enrich the connections to large Parklands area and to Burwood Hospital continues to trail needlessly behind the Metrostar route all the way from the Windsor shops and through the over-serviced but poorly planned Keyes Rd/Palmers Road/Baker Street enclave. North Shore area finally got the direct link to QEII a residents group asked for back in 2004 but the rest of the eastside, south of the Avon, lost all way of getting directly to QEII. ostensibly built on the eastside to benefit all residents.
Measured against criteria such as fast access to the city from all outer areas; enhanced community links within the eastside; increased potential for multi-directional travel for those dependent upon buses; democratic spread of services and service intensity to secondary hubs - over-all the end result doesn't score well in any category.
The eastern route review final result that was populist - bent to the loudest voices - but has little of the sense of purpose, strength or integrity inherent in good planning. Somehow that mish mash fleet of buses [expected to be replaced with a month or two] symbolizes for me the mish mash deal in services Metro continues to offer eastern residents.
Posted by David Welch at Monday, November 01, 2010