To Rangiora via Berlin!! Bob takes his most expensive trip yet 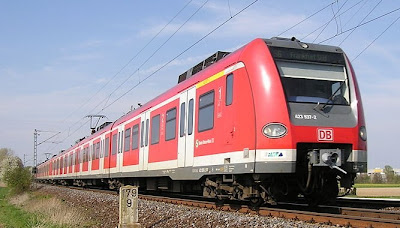 
*Per capita - and taxpayer.


Germany has 43,000 kilometres of railway track (much of it double and electrified) and 81 million residents. If the wabbit caculates right, that means around 1890 residents (and pro rata taxpayers) for every kilometre of rail track. By comparison in New Zealand we have 4000 kilometres of railway track but only 4.3 million residents or 1067 residents (and pro-rata taxpayers) per kilometre. In Australia this difference is even more exaggerated - only 661 residents per kilometre of track - but it also has huge long haul ore and coal trains etc which may soften the costs for taxpayers.


So if even before we step on a train - and even if we don't - a kiwi taxpayer will be forking out around two bucks for every one dollar equivalent of German citizens, on every bit of rail track.
Of course we also have to import most of the hardware - whether raw steel or built up parts - so that adds greater freight and added Exchange rate factors. The absolute number of tourists adds significantly to public transport ridership figures -  Germany getting 300 million tourist nights per year!


Hey but we get the space man!! All that wonderful open air and uncrowded living space and that fantastic backbone of snow covered alps! Yup


Germany is not such a big country physically - about 25% bigger in land area than Te Wai Pounamu. Expressed another way if we had a comparable population to Germany we would have 60 million people living south of Cook Strait. Not counting school bus ridership, all surface-based timetable public transport systems in Te Wai Pounamu, between them probably currently carry around - at the most exceedingly generous estimate - 25 million passenger trips per year (i.e. ChCh Metro network 17 million; Dunedin CC network 1.5 million passengers per year, plus longer distance bus trips and trains and some smaller cities with services).


Multiplied by the equivalent German population 25 million trips per year x 60 million - that's 1.5 billion passengers a year our Te Wai Pounamu networks would carry if we had a German size population even just on a current low percentage transit usage!  In reality with that sort of population/tourist density ridership services can afford to run far more often, including fast and smooth (wider track) long distance electric trains at frequent intervals stimulating far far greater use of public transport.


So not only is New Zealand operating a railway system almost twice as long per capita as Germany but, in Te Wai Pounamu at least, we have one 60th the potential passenger ridership available, probably less if we factor in our lower absolute tourist usage level. In the circumstances, building any public transport system dependent on rail has slim chance of success or being cost effective or even environmentally effective. Rather it will consume billions of dollars - as it is in Auckland - whilst delivering minimal quality service - long walks or needless bus/rail transfers, lots of standing passengers, services in three or four directions only and heaps of land in carparks.


I say it is time that we said "auf wiedersehen" (i.e. goodbye for now) to rail and started building effective public transport systems, the sort that minimize journey times and maximize frequency, direction and doorstep to doorstop access!!
Posted by David Welch at Wednesday, June 23, 2010