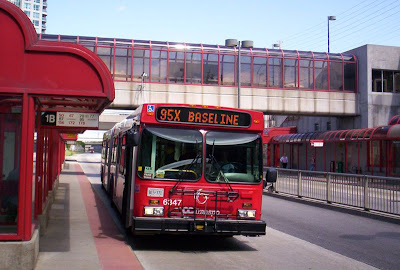 Yesterday I had a letter published in the local newspaper, The Press. No big deal, I write three or four a year, usually on public transport topics. This one was in response to a photo in the paper on Wednesday of the derelict Edgeware Swiming Pool, and a text saying the Council was advertising it for sale, including on "Trade Me". My letter began with a reference to this and ended with a comment about the Council trading away its bests assets. The pool is surrounded by mostly older housing stock, some appearing to be rental, and is close to two council housing complexes and a tennis club . All of this sits right on the alignment of the simplest and most obvious rapid transit corridor between Northlands Mall and Edgeware Village.

Unlike Auckland where the AMETI scheme is expected to take 329 properties, or even Wellington where the widening of Adelaide Road for bus lanes requires the acquisition of all or part of some 47 properties, or local Mall expansion which gobbled up scores of private residences, my guess is that this corridor, landscaped like a park with cycleway and pedestrian paths as well, would require less than a dozen properties, three of the larger blocks anyway council owned. If it decided to purchase more properties it would be because because the council had belatedly realised the significance of such a large block in promoting UDS goals of intensification, and overseas practises of creating such intensity around key public transport corridors. The Edgeware enclave could include attractive apartment complexes, to several storeys, without intruding on lower housing nearby,  linked to the adjacent Edgeware shopping centre, intersected by the transitway and a north-south/east-west transfer station, and offering access to city centre or Northlands in less than 6 minutes.


Transitway? That's a new word for the dwatted wabbit is it not? Indeed, it is word that had never previously passed my lips. It seems to be term only widely used in Canada,  for what are usually fully segregated bus corridors . Previously I have thought the word "transitway" a little clumsy. In letters on this subject (dating back to 2002) I have used the term busway.  But I didn't want to preclude the light rail option for this corridor - I don't see the numbers stacking up for light rail and it doesn't have the advantage of feeding on and off the trunk corridor in multiple directions as do bus systems - but it seems premature to exclude it, particular if the city is trying to encourage high density housing in this area. So searching for a more open ended term I used " transitway " .

Well the The Press editorial crew in their wisdom wacked off my tilt at the Council advertising on "Trade me" and the trading off of Council assets and printed the letter without these bookends.  Just porinyted  the core advocacy of the corridor, given the letter the simple title Need Transitway. Checking to see whether the letter got in the paper that word "transitway" leapt of the page at me. It is possibly the first time this term has been used in reference to local transport in New Zealand! Most powerfully it by-passed the whole light rail versus busway argument as neatly as the suggested corridor from Northlands would by-pass all the congestion and traffic light intersections on both Papanui Road and Cranford Street. It put emphasis on the corridor not the mode, and it was obscure enough (yet clear enough after 30 seconds reading of the letter) to not immediately create neat jerk reactions, such as the "buses are loser cruisers" fantasy held by people who never catch buses and seem to imagine they are all filled with the great unwashed, taggers and marauding patched gangs.

In the spirit of a previous posting (Looking for the Corridors of Power) the word transitway defines that the real battleground for future public transport is creating the fast corridors that link outer suburbs to the central city (and key employment zones) in much faster time than currently  offered, including those with part time bus lanes.  Transitway says to me, we need to know where we are going now, and therefore protect the corridors, even if other medium term uses are made of them. There is also a nice ambiguity - I like the resonance of things like this that carry many different references within them  - the transitway is also the transit way - the way to go if we want to keep a sane, happy and prosperous society after oil prices squeeze out indiscriminate car use.

PHOTO (above- source; wikipedia commons ) - Westboro Station on the Ottawa Transitway system, a system first begun 1983, with 35km of completely segregated bus lanes, such as those shown here.
At 123 trips per head of capita per annum Ottawa's public transport system is probably the most successful in CANZUS, in any city under 1.5 million. Ottawa and the adjacent city of Gatineau (which is building a 15km bus only corridor) have a metropolitan population smaller than that of Auckland but their transit systems carry over 120 million passengers a year, well over double Auckland patronage. Only 2 million of these carried on a short light rail line, with plans to introduce light rail on a further section of high density.