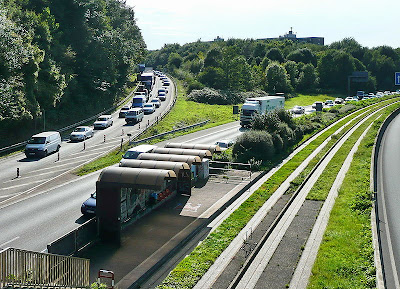 An interesting trend is guided busways, where the bus driver does not even need to steer (small guide wheels which face outward towards an enclosing curb do the steering for the driver). The advantage of these is that very high speeds can be obtained with very smooth passage, and precise docking at entry level platforms. In this way they can deliver much the quality of a rail journey without the jolts or lurches, without the greater safety problems and constant track checking required of rail. They also avoid the messy business of needing big car parks at stations or (as recently reported in both Melbourne and Auckland) the irritation of residents close to suburban stations having car doors slamming from 6am onwards, and otherwise quiet cul de sacs becoming all day carparks. The same buses that have guidewheels, can in most systems run off the guided busway onto normal streets, the de facto equivalent of a trains carriages all heading off in different directions to drop people in their own immediate neighbourhoods. The potential in the right situation is enormous. In Cambridgeshire in the United Kingdom the longest guided busway at in the world is nearing completion. This will link a range of rapidly expanding towns and settlements with Cambridge itself - 25km in 16 minutes at 100km per hour.  The success or not of this is something that apparently many English transport planners and the Department for Transportat are watching with great interest, the corridors of many other closed or minor railway lines offering potential conversion to guided busway. The photo at top of this article is from Wikipedia Commons, is unamed, and may be a different system, but it does show how much more attractive and less intrusive a high speed bus corridor can be in the rural setting. Below is not quite so sylvan in its charms, the half built busway on a gloomy English day, one of the buses (which also have leather seats and wi fi access) running a trial past a busway/road intersection - note what appear to be car traps!! 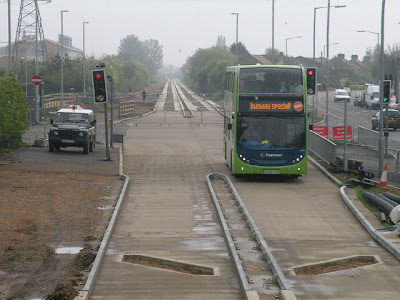