Following release of the Christchurch Central City (post earthquake rebuild)Transport Plan it has become clear that the city council is prepared to support having certain streets giving priority to a particular mode of transport.


Rather than the private car and commercial vehicle being king and queen of every road and street - with bike lanes and bus lanes squashed into one side - this strategy will see wide pedestrian or  bus or cycling lanes, taking priority in some central city streets. See official map below 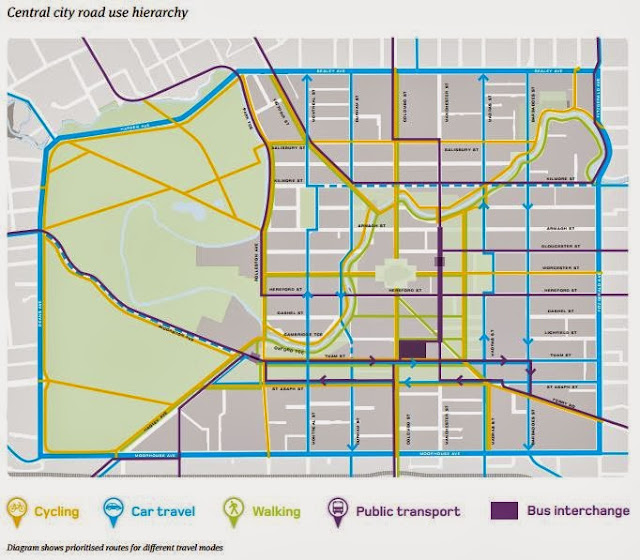 NZ in Tranzit believes this is an excellent concept and should also be carried into the inner suburbs and even city wide, on a select number of streets.

Indeed this blogster believes the city should create a concept called "Green Roads" - these are not just a single street, but a number of streets that can be linked together (sometimes by off road segregated corridors) to create attractive corridors in which private cars and commercial vehicles are largely absent, restricted. or take second place to other modes.

A limited number of properties would need to be purchased, demolished or relocated, and the landlords (or in rare cases, owner occupiers) compensated but this also allows heaps of options. These  added features, such as drinking fountains, rain shelters, native forest landscaping, childrens safe play zones, or facilities for the use pf immediate local community such as a tennis or basketball court or a conversation pit.

Total land use planning would ensure a good mix of easy access to a rapid frequent bus service, but shielding and buffering of local housing from any pollution or undue exposure to buses.

Potential exists to create some very beautiful "green rivers" with a two directional busway (on beautifully smooth bus only roading and door level loading mini stations) and adjoining this bus lane but separate in almost every situation wide (4 plus metres) "roads" for cyclists, skaters, pedestrians.

The aim of each GREEN ROAd is to connect the dots - residential areas in outer areas, and in higher density inner suburbs, directly to the city centre and other high passenger traffic generators, such as malls, without being trapped in traffic jams and in ways that allow much higher quality infrastructure than conventional roads or just bus lanes can achieve,

NZ in Tranzit has long promoted the building of a GREEN ROAD (to use this new term)  from CBD to Grassmere Street area, dividing into arms running tofro Belfast and Northlands-Sawyers Arms etc.

Campaigning on this modest busway suggestion, requiring purchase of about 15 properties, but remodelling a whole area near Edgeware into an attractive mix of higher density social housing, apartments and recreation facilities,first began  in 2002. I would guess (based on other similar projects) would cost approximately $80 million (not counting some work done under housing and parks budget).

Special features of this Northern Green Road would include a wide landscaped transit and active boulevard, from Edgeware Road to Rutland Street direct; a elongated pak between Paparoa St and Grassmere Street; a bus and active flyover ramp across Cranford Street (about $8 million?) and a bus underpass - beside the bike underpass - under QEII Drive (about $6 million?). 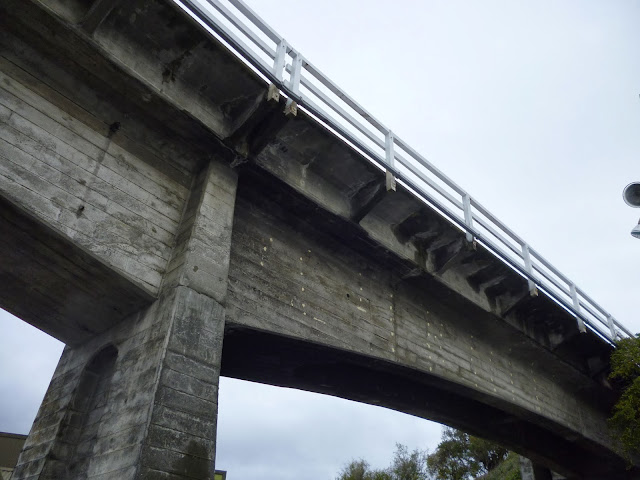 Simple infrastructure across Cranford street, near the pooling basin, a ramp and central viaduct (cost  $8 million?) would allow millions of future bus and bike trips from north of city and from Waimakariri District to travel directly into the city centre via a Green Road under QEII Drive, over Cranford St, around the pooling basin through Rutland Street,  Edgeware, Canon Street and Manchester Street.

Earlier this year, in NZ in Tranzit I have added a similar concept  from Mandeville Street in Riccarton to Middleton Road, and the University. This bypasses almost all the congestion along Riccarton Road whilst delivering maximum access tofro the main people generators of Westfield and the University, and core high density Riccarton residential block. This project would require about 25 properties (mostly run down rentals occupied by students) but come in under $50 million. Later it can be linked,  under the railway line and back towards Hagley Park, Definitely a Green Road!

Both Green Roads could be the first sensible step (securing the land corridors) towards building light rail, probably not in this decade (it is far, far too expensive for our small city and GDP per capita!) but one day, and half the work done already. Alternately the rapid evolution of electric buses may make this unnecessary.

Two beautiful world class rapid transit corridors (but more aptly, potently and attractively called Green Roads) landscaped, a dream for walkers, joggers, skaters, cyclists, a natural environment for face to face community interaction. Corridors that steal almost nothing from motorists, residents or shopkeepers; add nothing to congestion, corridors that deliver on time (with 5 minutes) every time, corridors  with smooth gliding buses (and mini-stations along the way, with minimum delay from intersecting traffic, with maximum opportunity for public-private high density housing within minutes of easy access to CBD.

All this for $200 million, spread across say ten years, and with Government funding two thirds, and getting off bloody easy at that!

Definition of road  - a pathway for traffic of all kinds (in New Zealand even beaches are legally classified as roads!)

... also "road" as a spiritual and philosophical concept, as in "the road to recovery" or "the road forward",