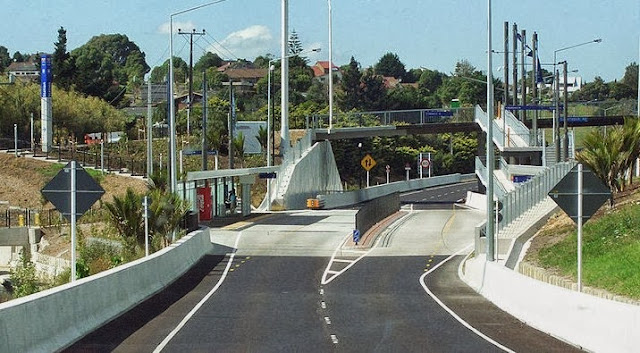 Its not very often NZ in Tranzit is "hot" with the news, but today - indeed right now - in the United Kingdom another guided busway begins the first day of  public operation.

This busway in Luton area, north of London, consists of 13 km of mostly segregated busway with 7.4 kilometres of this utilising concrete tracks built along a former railway line corridor to provide a smoother-than-rail guided busway. The route bypasses heavy traffic corridors whilst still servicing key points and is expected to offer patrons a 15 minute bus journey, hugely competitive with the one hour journey by car or longer by conventional bus routes in peak hours over the same distance.

The Luton busway is the culmination of 20 years of work and planning by the local council and construction costs over ran £91 million pounds by less than 1%.

Luton authorities were no doubt stimulated in the project by the huge success of the Cambridgeshire guided busway which attracted a ridership of two and a half million trips  in its first year and, even by that first anniversary. was racing far ahead of its business case. The long standing legal case between contractors Bam Nuttall and the local Cambridgeshire  authority has also been resolved with the courts ordering Bam Nuttall to repay  £33 million, bringing the real final cost of the 25 km busway down to under £80 million.

The busway option was chosen over rail because it was a fifth of the cost of rail, offered greater capacity, greater frequency and by running some services into adjoining residential areas (as conventional bus services) removed the need for passengers to transfer, offering a one seat journey.

This week also saw the first sod turned on the Leigh Guided Busway - a  £76 million bus corridor - again with a central guided section on concrete tracks - running from Leigh into Manchester.

As with light rail - but at a far reduced costs per kilometre and with greater flexibility than a single route light rail system - the permanent nature of busways with dedicated infrastructure can play a significant role in stimulating local businesses, new employment zones and urban revival.

This was again brought home this week in the USA where a study by an independent transport research institute of the Martin Luther King Jr East Busway in Pittsburg. This corridor - one section cantilevered of the side of a gully above a railway line - was built in 1983 (the first Bus Rapid Transit system in the USA) revealed that the busway had brought over $US900 million in development and urban regeneration around the East Liberty bus station. Fifteen different routes flow along all or part of the MLK East Busway, which generates over 7 million passengers trips per year. 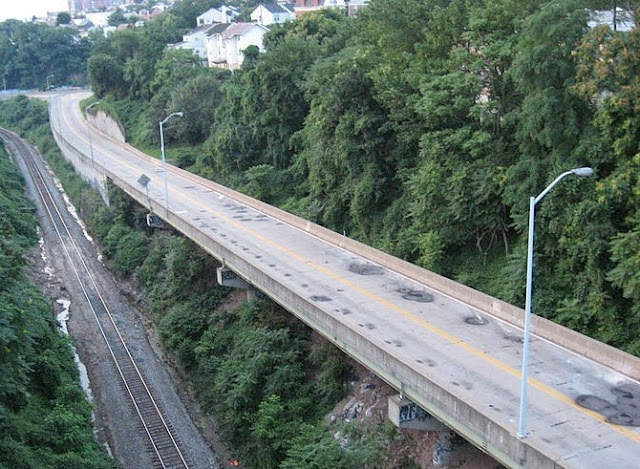 Only a few weeks ago Infrastructure Australia knocked back requests to help fund light rail in Canberra, pointing out that the cost-benefit returns of bus rapid transit average $4.70 return (for every dollar invested) compared to light rail returning $2.30. This suggests that from a taxpayer viewpoint effective busways can be twice as effective as a public investment too.

However - also hot off the press two days ago - in Cleveland, Ohio, the building of the Healthline [strange name - they sold naming rights] a lane based bus rapid transit corridor is described in a report as having levered up local business regeneration equivalent to $US5.8 billion, or a return of $114.54c for every dollar spent on building the $50 million corridor (a further $150 million was spent on associated neighbourhood changes).

However any public transport application is very much what suits local conditions best with busways a clear and obvious winner in Christchurch, though provision should be made for future commuter rail, setting aside land now for 10-20 years ahead.

We once had the best bus system in New Zealand and was there the political vision we could consciously set out to create the best bus system in any small city in the world, utilising our many strengths, and modern bus rapid transit concepts, most of which have barely entered public knowledge in Christchurch.

A busway [and of cycleway] using on-street lanes (at major intersections etc permanent lanes) could be built straight up Manchester Street, from the permanent lanes in planning, crossing Bealey Avenue and then curve left into Cannon Street crossing Sherbourne and Colombo Streets at bus triggered lights, then curve right, north into Caledonia Road and an Edgeware bus station before continuing via landscaped bus boulevarde to Rutland Street, to Redwood and Belfast etc [as previously described]  .

Even the poms themselves can't offer "Manchester to Belfast" in 15 minutes!

Light rail is far too too expensive per kilometre and vastly dearer in NZ than overseas because of our very modest  per capita GDP and small per kilometer taxpayer base.

This would complement electric buses -  with added easy-load cycle facilities on many buses - doing most of the long haul rapid transit donkey work.