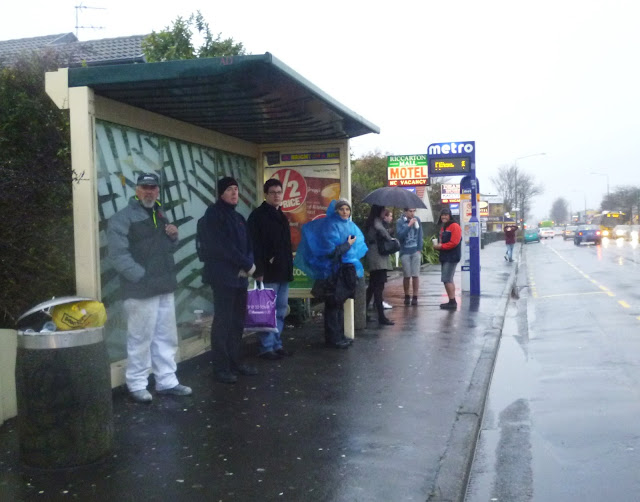 Some Auckland Suburban Stations/Transfers Points and Costs. Newmarket Rail $84 million; Panmure Rail/Bus $28 million; New Lynn Rail/Bus $160 million; Swanson $20 million; etc etc - all partly paid for by these Christchurch bus commuters and taxpayers. These generous folk are seen here at one of the equivalent Christchurch key transfer "stations" opposite Westfield, in Christchurch, a point linking east-west axis routes and Lincoln/Rolleston services with the Orbiter and Metrostar, as well as servicing access to city and Westfield Mall. (Cost of bus shelter with wet seat unknown).

The Government has announced over $10 billion dollars worth of transport projects for Auckland including the $2.85 billion underground rail link and a tunnel under Auckland Harbour.

This would make perfect sense to me if Auckland - 32.4% of the total population - was some huge power house earner of our national wealth - at least 50% of GDP.

However where ever I look I see the GDP per capita in Auckland is only 36% of of our national GDP.  It is only slightly more per head than the other major centres.

Why  should Christchurch and Canterbury [and other regions] receive next to nothing to develop effective transit and active mode transport?  (Indeed the Government withdrew funding for Christchurch city's modest programme of fairly minimalist bus lanes and bike lanes and road safety back in 2009!).

Yet Auckland, only three and half times bigger in population is getting billions of dollars.

To me this reeks of a grossly unfair distribution and a huge subsidy. Can some one explain to me why this absurd distortion should be?