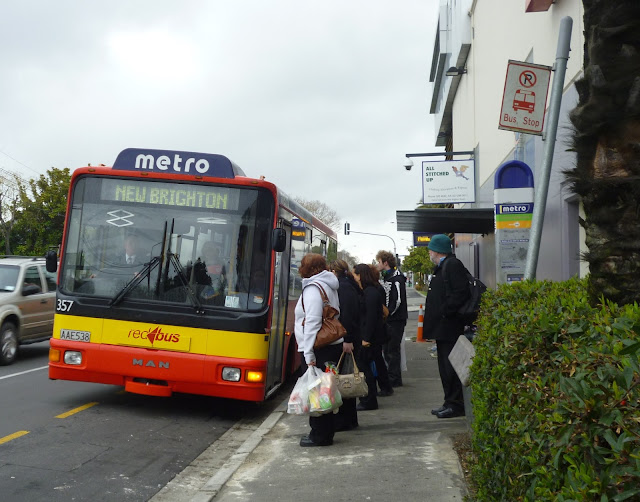 2004 " This is just an early indication of our long-term future if we do not act now to avoid the transport headaches facing Auckland today.....This is why the Christchurch City Council has developed a long- term transport vision to avoid such a future. This long-term plan is made up of various strategies, all focused on a single vision for Christchurch, a transport system that supports a quality of life second to none......

"Other council work during this period will include improvements to bus stop amenities across Christchurch and to develop a citywide programme of suburban interchanges or mini bus exchanges at popular metro interchange points where different routes meet.'

From The Press July 1st 2004 - Metro More Attractive by line... "Christchurch is acting to prevent the sort of traffic problems that clog Auckland."

2013 The Palms Bus transfer point?? Near the intersection where bus routes travel in about eight different directions -  a shabby freezing cold, windy bleak spot, exposed to accelerating car traffic, 200-300 metres to other stops - scattered around the area - and operating in a route/timing pattern almost entirely antagonistic to transfer needs .

However Jerry Brownlee (of all people!! ) appears to have a great plan to improve Christchurch public transport woes! He's got his boys workin' on it...


Canterbury is 12% of New Zealand's population but for many decades has never received anything approaching 12% of the "public transport dollar" particularly for capital works. Basically fair weather or foul, business as usual or catastrophic earthquake, the Canterbury tax payer has continued to pay out to subsidise  public transport in Auckland and Wellington regions.

When Wellington spent $90 million on the Waikanae commuter line extension and $31 million "new" carriages and a five station upgrade on the Wairarapa Commuter Line (with combined populations far less than South Canterbury) it didn't even enter the head of the Mayors of Timaru, Ashburton or Christchurch to shout "Foul ball". Nope. Of the $121 million spent by the rail authority 12% = $14.4 million came from Canterbury pockets.

Indeed NZ in Tranzit estimates approximately over $300 million dollars of "public transport dollar" has been milked from Canterbury and sent north in the last 15 years to fund close to $3 billion worth of transit infrastructure  up North.

But can these woes be improved?

Yes -  it seems these woes can be improved.

Indeed  the transit woes of Canterbury can be improved and made greater by a factor of several hundred per cent!!.

Under the auspices of Minister of Transport Jerry Brownlee NZ Transport Agency has found there is still heaps more the Canterbury taxpayer can fork out, while shortchanging transit funding in Christchurch worse than ever.

While our Minister of Transport hogties future public transport in Canterbury with a minimal $100 million spread over three years, NZ Transport Agency and Auckland city authorities  are lining up Auckland  for a massive $60 billion transport -  roading and public transport  - spend up over the next 30 years.

Obviously road taxes and possibly tolls will cover  much of this but it is also equally obvious that given Auckland population isn't THAT MUCH larger than Christchurch (less than four times bigger and only likely to widen that ratio slowly, if at all over many years) nationwide all taxpayers including  us here in Canterbury will also be forking out.

Astounding stuff - and apart from a few poorly informed  mumbles from Jim Anderton at the last local body elections -  not a single politician in Canterbury prepared to get up and fight for a decent 21st century quality public transport system!!

After 20 years of ECan/Council  hype we are STILL NOT MOVING towards completely segregated busways, an integrated network, a region wide commuter network and a city building commuter rail system, - indeed almost every obvious (and budget effective) opportunity in this area over the last 15 years has been thrown away!! For God's sake we haven't got decent bus shelters at major hub points - see photo above for the combined productive genius of two councils over almost 20 years!!

Minimal and poorly planned, timed and executed bus lanes with major choke points that still buses leave queueing and passengers missing transfer connections, unsupported by roading or land use changes and lack of mobility moderating technological support, failure of public transport to sustain growth etc, did not start with the earthquakes, that disaster has been building for years!!

There is an old saying that "You put your money where your mouth is" - but no significant** investment in public transport infrastructure in Canterbury has been made in 20 years!!  Post quake extra costs and rebuilds absorbing the $33 million per year, will certainly ensure that this will remain true.

And if Canterbury forks out its usual 12% of tax that is the best part of $5 billion heading north!

** a few million dollars on part-time bus lanes, and a budget [original] bus exchange that quicked bogged down because it was built without growth potential, and built for less than the cost the remote Auckland suburban  rail station Swanson (about $20 million) does not really do the term "significant"