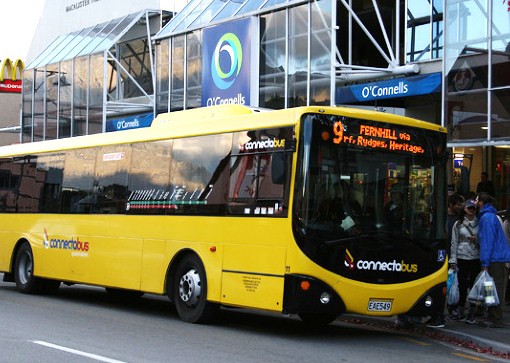 Photo thanks to Japanese language blog; http://blog.daum.net/syunlady/8
In a rare event for New Zealand a regular bus service offering multiple routes in a town of less than 20,000 people has proved it can offer an extensive service without rate-payer or tax subsidy
Reports online media Scoop ""A 32 month trial offering bus services to outlying Queenstown suburbs finishes this month and has been hailed a success by two trial partners Otago Regional Council (ORC) and bus service provider Connectabus.
The project was established with significant investment by ORC, New Zealand Transport Agency, Connectabus, and Queenstown-Lakes District Council. It was designed to provide improved and reliable commuter services which would become commercially viable, and therefore permanent, within the project time-frame.
The town in question, Queenstown, is a leading South Island tourist spot offering spectacular scenery and a beautiful lakescape (is there such a word?) all year round and multiple ski-fields in the area in winter.
Across any given year 99 out of every 100 people you will see in the street are actually visitors.
Although  Queenstown only has a resident population of 18,000 (many of these relatively short term workers in the tourist industry) it gets 1.8 million visitors a year.
As with any urban situation the percentage of visitors with cars is of course far less than that of local residents. Nonetheless this does not diminish the fact that a very effective level of bus service has been created by a great deal of thought and planning and commitment by a private firm Connectabus and its owner Ewen McCammon, which has used public money for the last two and half years only to lever itself into a commercial position.
It is a great pity that we have a Government oblivious to the public transport needs needs of the aging, elderly, disabled, limited income families and tourists and visitors in other smaller towns of NZ. Here too equally intelligent planning - albeit on a smaller scale (a single orbital or figure 8 route for example) could give every centre over 10,000 an attractive core bus service linking key facilities 6 days a week.
A part of the Queenstown strategy has been to build a transfer based system, with a 15 minute link service between the town centre and Frankton, a long a very busy road that is also an extended neck of limited population.  Passengers transfer at either end to other runs, avoiding tying up vehicles all running into the centre and doubtlessly running far less often than every 15 minutes. This saves greatly on the number of vehicles needed  - a small version of what ECan's Metro is attempting in Christchurch and has been forced to introduce in such dismal circumstances with dubious chance of success.
The irony of the Otago Regional Council helping foster such a well organised attractively marketed system will not be lost on those interested in public transport - the services of the same organisation in Dunedin are remarkably clumsy and ORC itself offers possibly the most poorly presented public authority bus service interface in the world!! **